The Comedy of Errors at Reisterstown Theatre Project

Reisterstown Theatre Project presents its fourth production of Shakespeare in the Park with one of the playwright’s earliest works, The Comedy of Errors. In this super casual, yet cheerful production, the company does a fine job with this classic farce. The outdoor theater is in Hannah More Park in Reisterstown. The stage and set are very informal, with caution tape and lattice sectioning off the stage area. There is a variety of seating choices, from picnic tables to lawn chars to the option of bringing your own camp chairs or blankets (picnics are also welcome).

Comedy of Errors is the story of the mistaken identity of separated twins (two sets!), and a father looking for his family and freedom. Antipholus of Syracuse and his servant, Dromio of Syracuse unknowingly enter Ephesus, the hometown of their twins. From there we watch the confusion unfold, as a wife, merchants, and other citizens interact with the visitors. The twins take turns getting each other in all sorts of amusing trouble until a sweet reunion gives us resolution. 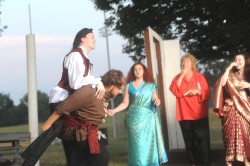 The cast of The Comedy of Errors. Photo by Joshua McKerrow.

The ensemble’s talent ranges from serviceable to impressive, which gives a slight imbalance to the performance as a whole, but not enough to detract from the play’s many successes. The actors are all having a great time which is contagious to the audience. When performing Shakespeare, some actors have a tendency to over- dramatize the dialogue. While the beauty of the flourish of the writing is undeniable, I find his plays most effective and enjoyable when actors get comfortable with the script and let the content – rather than flowery language – be their guide. I was happy to that find most of the actors in this play gave a natural delivery.

Jenn Mikulski (Antipholus of Ephesus) commands her role with a good dose of arrogance as a married man who finds himself blamed for more than his standard share of offenses – with his identical twin on the loose. Kat McKerrow plays Adriana, his neglected and unhappy wife. Daniel Douek (Antipholus of Syracuse) passionately plays his role as Mikulski’s twin. His interaction with Cristina Petrarca (Luciana) is most amusing, as she plays the hesitant coquette to his advances. She believes he is her brother-in-law, when in fact they have never met.

Denise Loukus (First Merchant and Angelo) gives a truly engaging performance. She makes ‘scene stealing’ look effortless. Joel Loukus (Dromio of Ephesus) also gives a memorable performance and receives some of the biggest chuckles with his energetic line interpretations and Abbott Costello-like physical comedy. Jeff Murray seems at home with ‘Shakes-speak’ and makes a good Aegeon, the voice of justice for the town of Ephesus.

Director Richard Peck shows good judgment in his use of the space. Entrances and exits from all directions, give the blocking life. Although the set is very minimal (perfectly appropriate for non permanent outdoor venues), the scenes are clearly defined. He and Assistant Director, Kathy McCrory, do a wonderful job in casting, given the difficult task of finding actors to portray identical twins. The fact that the twins are cast with opposite genders contribute to the show’s farcical nature. Peck also displays that he’s a fine actor playing Duke Solinus and Pinch.

Bob and June Frank are the friendly couple that runs RTP. They contribute to The Comedy of Errors as Technical Director and Producer, respectively. Bob greets patrons as they arrive and June hands out apples and popcorn with a smile during intermission, treating the attendees like guests in her home. Their carefree and bohemian approach to bringing lofty theater down to earth for the community carries over into the spirit of this show.

Denise Loukus (displaying yet another talent) takes some original costuming liberties in the form of colorful saris, cowboy boots and sunglasses, and a priest’s frock all of which work to the production’s advantage. This is a great way to inject even the most minimal characters, such as the officers, with humor.

To quote Shakespeare himself, “I regard the theatre as the greatest of all art forms, the most immediate way in which a human being can share with another the sense of what it is to be a human being.” Humanity is shared in a very worthwhile way with RTP’s Shakespeare in the Park. Although not flawless, I found this rendition of The Comedy of Errors pleasing and funny – making it a summertime treat

The show runs a little over two hours. I recommend parking as close to the school as possible, as that is the best lit area after dark.

The Comedy of Errors plays through August 13th at Hannah More Park, in Reisterstown, MD. For more information call (443) 226-6401. Or visit their website.