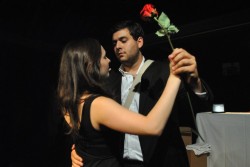 Kensington Arts Theatre is reprising its recent production of The Last Five Years at The Gaithersburg Arts Barn. There is not one bad seat in this cozy theatre which is a perfect setting for this intimate musical. There is just a piano backing up the vocals of the show’s two performers. Perhaps using just the piano is a risk taken by musical director Valerie A. Higgs, but more likely it’s her confidence in her two stars – Ryan Burke and Maggie Donovan – to deliver.

I had heard great things about Ryan Burke, who plays Jamie Wellerstein. His performance demonstrates his vocal talent, range, and his charisma as a lead performer. The program states Ryan was honored for his performance as Jamie earlier this year by my editor Joel Markowitz on DC Theatre Scene in Ten Young Outstanding Performers, and both he and Maggie Donovan were also honored for their performances in Montgomery College’s production of The 25th Annual Putnam County Spelling Bee in Wrapping Up the Year With Musical Scene Stealers. Ryan has numerous highlights including the crowd pleasing renditions of “Shiksa Goddess” and “The Schmuel Song.”

Maggie Donovan, who plays Cathy Hyatt – Jamie’s wife who wants to be a successful actress but doesn’t want to live in her husband’s shadow – also displays an incredible vocal range and talent. She is also considerably gifted and able to show Cathy’s intense emotion, demonstrated on the show opener “Still Hurting.” Her renditions of “See I’m Smiling” and “I’m a Part of That” are heartfelt and beautifully sung.

Director Craig Pettinati delivers a quality production with a wonderfully talented cast. The Last Five Years is a powerful musical which demonstrates the struggle of a relationship, points out what went wrong, and displays all of the emotion for the audience to see.