The Last Night of Ballyhoo at Jewish Theatre Workshop

Sometimes it’s nice to know you’re not alone in your interpretation of the world. Given that Christmas is celebrated all over the world, it isn’t surprising that non-Christians would find their way into the classic holiday culture of Christmas trees, holly and mistletoe. The question that sits in the middle of this play, set in 1939, is, “Could German Jews – who at the time of the play’s setting had lived in the USA for 150 years, – celebrate the look and feel the red and green-filled holiday – and ignore the Jewish faith and customs practiced for generations by Russian Jews?” 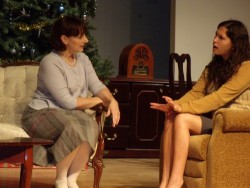 Playwright Alfred Uhry’s (Driving Miss Daisy) Tony Award-winning play The Last Night of Ballyhoo deflects southern charm away from the Southern Belles of Gone with the Wind, and sets the panoramic stage of holiday dressing which exhibits more of who we wish to be – than who we really are. Director Gavriel Lewin directs a wonderful cast of actors who give powerful and thought provoking performances. I was so impressed that he moved the characters around the stage so we felt that we knew them personally.

We are introduced to an extended Atlanta family – the Freitags and the Levys – and an unexpected visitor, Joe Farkas. Boo Levy, played by Lisa Jacobs with motherly protectiveness and firm resolve, has lost her way. She sees a bright future for her daughter, Lala played with yet-to-be-controlled impulses by Shiri Cooper, who makes her debut with the Jewish Theatre Workshop in this show. Lala’s future, sponsored by Boo’s correct social connections, is thought to be captured best among relations with the dandies and hoop skirts of the best southern families. With the premier of Gone with the Wind tantalizingly appealing to Boo and daughter Lala, we learn that the highlight of their social year is the celebration of Ballyhoo, a formal Jewish festive affair reaching far into the customs of Christendom.

Boo’s brother, Adolph, played with Southern charm and spirited flair by Ed Klein, is the down-to-earth backbone of the family. His newly-hired employee, Joe Farkas, played sensitively and compassionately by Issac Kotlicky, is recruited to assist Lala’s cousin, Sunny Frietag, a Welsley student on her trip home from college with more on her mind than celebrating Christmas! Joe, with ties to Russian royalty, signifies the root of the Jewish experience. His very presence defies the bustling business of Jews participating in Christmas frivolity.

The beautiful set designed by JRH Sauthoff gives the show a holiday greeting card – which defies the truth behind The Last Night of Ballyhoo. The Christmas tree and dining room table set with green and red cut velvet patterned table cloth and plates of holiday treats and sumptuous soups, holds the secret to bringing together the meaning of this play, “How do Jews find uniqueness while identifying and cherishing the things they have in common?

The humor of this play is sparked and lifted by Susan Vick as Reba Freitag, Sunny’s mother, who praises all that Sunny is and all that she herself will never be. Flitting between naiveté and early senility, we see a woman who has the good sense to allow her daughter the freedom she needs to make uncommon connections. Amalia Mark as Sunny makes all the right connections in this play. Poised in her role and engaging, she draws us all in as her southern Welsleyan words melt from her mouth like honey on hot cakes.

Peachy Weil, played with persnickety snobbery by Will Fleagle, is the much awaited ‘best southern family’ date of Lala who is persistently jealous of Sunny and her accomplishments. With so much going on – one feels that the family will never come to understand the true meaning of what it is to be Jewish. Joe, who I learned was wearing a tie from his father’s 1970’s wardrobe, is the catalyst to the preservation of the Freitag-Levy family. Family conflicts not withstanding – and with the dawn of prejudice and bigotry looming heavily about them – it was good to see the possibility of Jews coming together through beauty and faith, and not through today’s fads and fashions.