The Marcy and Zina Show at Signature Theatre

Marcy Heisler (lyrics) and Zina Goldrich (music) have been writing together for 18 years. The dynamic and original duo’s songs have been covered by Kristin Chenoweth, Michael Feinstein and a host of other Broadway and cabaret talent, including Stephanie J. Block and Emily Skinner. While it is always fun to hear their songs interpreted by the great voices of musical theatre and beyond, it is, perhaps, an even greater thrill to get the opportunity to hear the composers perform their own work and learn the stories behind the songs. Audiences at Arlington’s Signature Theatre are getting that chance this month as the theatre kicks off its 2011-2012 season. 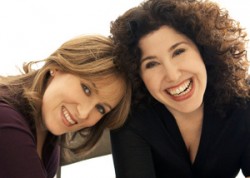 The Marcy and Zina Show is a perfect catalyst for the new season because the duo is one of the most original voices in American musical theatre today. The seamless show allows Goldrich and Heisler to showcase some of their more well-known songs such as “Alto’s Lament” and “Taylor the Latte Boy,” both of which are standards on the cabaret scene. Their expressive and playful take on these songs make it easy to forget that we’ve heard them countless times before. They also share some of their lesser known songs with the appreciative audience, including “Far Away,” which is beautifully performed by special guest Bayla Whitten. Whitten displays great vocal range and interprets the wistful and longing lyrics with great skill.

Marcy and Zina have also tried their hand at writing full-length musicals, including Dear Edwina and Junie B. Jones – both of which have had runs Off-Broadway – as well as Snow White, Rose Red (and Fred), which premiered earlier this year at The Kennedy Center. The Signature audience was treated to three songs from their newest musical, Ever After, which is slated for a Broadway workshop this October and is based on the Hollywood film of the same name. These songs were, by far, the highlight of the evening.

“Who Needs Love,” performed by Marcy, was entertaining and refreshing, and definitely an unordinary ‘princess song’ that the heroine sings to express her feelings on the oft discussed subject; it’s not “Someday My Prince Will Come” to be sure.  “Ever After,” the title song in the show, is equally strong.

Guest artist Scott Coulter, who has worked with Marcy for fourteen years, displays his strong tenor voice in “Right Before My Eyes,” an emotional and melodic tune that gives voice to the prince in the play. The three songs are memorable and we look forward to hearing them in the full production.

Marcy and Zina have long been known as the duo that writes quirky and original songs about love, the art of falling in (and out) of love, and the zany things that can happen on the dating scene. While this cabaret act showcases many of these songs – including the humorous “That’s All,” written, uncharacteristically, from the male perspective, and the memorable “15 Pounds (Away from My Love)”- it also demonstrates Marcy and Zina’s breadth as writers. Songs like “Welcome the Rain,” which Coulter proclaimed was his favorite Marcy and Zina song, evoke powerful emotional images and resonate well with virtually any audience member, young or old.

Overall, we highly suggest that you make your way to catch Marcy and Zina at Signature Theatre. While they are exceptionally talented writers and musicians, they are also skilled cabaret performers with strong voices. The evening of songs and stories, which also features the musical talent of bassist Mary Ann McSweeney, is not to be missed. Audiences will experience Marcy and Zina up close and personal, as so many of their songs are drawn from their own experiences.