Hitchhiking has not gone extinct. People still do it and the myth and mystery of the road definitely still exist. This might be the only play about a man with hitchhiking habit, though, and an entertaining one it is.

The Baltimore Playwrights Festival offers up not necessarily raw works, but still fresh plays, all quite new to the world, every summer. Spotlighters Theatre is hosting one of them now in the rather impressive thirtieth year of the festival, Kevin Kostic’s also rather impressive Unraveled on the Gravel, a darkly tinted but rather charming little musical. Unusual for the Playwrights Festival, this is a musical, and a really strong collection of folk-pop songs, for the most part, quite skillfully wrapped around an odd little ghost story and psychodrama. Kostic wrote the music, lyrics, and book, and Michael Tan, a Spotlighters stalwart, directed. 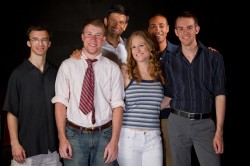 Unlike many musicals, in which an audience can really feel the contrivances at times – pulling the play in the direction of plot, then pulling the plot in the direction of a song – this show works skillfully around its plot’s own central device, a gradual spiral backwards through time towards its shocking inciting incident. The songs, in many ways, are simply incidental to the action, engaging with a greater emotional depth the psychodrama aspect of the piece, exploring Ray’s own inner turmoil.

The play is very mysterious from the top, when a compulsive hitchhiker, Ray (Josh Kemper), unwilling to marry on the day of his wedding, is quite literally haunted by his past. A very quiet, very smooth, creepily-eyed man, Wricks (Christopher Jones), observes Ray throughout the play, occasionally commenting. It takes most of the rest of the play to work back to the scene of Ray’s initial unraveling, through many songs endearing us to him and especially his good-natured buddies, Marlon (Nick Huber) and Wayne (Mike Milillo). All the while, Wricks lurks, and actually displays a fantastic voice.

If there is any great weakness to this production, it is in fact the voices, as some performers are much stronger with the musical material than others. Any chance for Mr. Jones to sing is more than worth it, though. Fortunately, there are several lovely moments of harmony amongst several voices, particularly in the songs “Noise”, “Brotherhood”, and “Clean”. Kostic’s music and dialogue do blend nicely into each other, though, and often in some very catchy tunes.

This haunted little drama might inspire another look down a dark highway sometime in wonder – as much as it might inspire one to keep going to see the original work of local playwrights.

Unraveled on the Gravel runs through August 21st at Audrey Herman Spotlighters Theatre – 817 St Paul Street, in Baltimore, MD. Purchase tickets online, or at the theatre.