Remembering the pulse and heat of the ‘60’s is not required to enjoy Zulu Fits now playing at the Heralds of Hope Theater Company, but If you raised a fist to punctuate “Black Power!” or wore your hair in an Afro back in the day, you will understand what this play has to say, what makes some black folks tick and the things that make all of us fall under the spell of imagined celebrity. 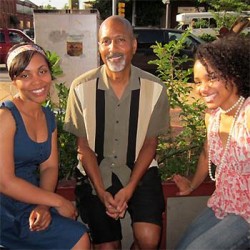 You can’t really sit back and watch this play without becoming involved on a visceral level. Playwright/Director Alonzo D. LaMont, Jr. has carefully placed accents such as videos of ‘man on the street’ interviews and media blitz-type news coverage behind every scene’s action. You are entreated to participate in spirit as loud chords echo the loss of innocence and misplaced loyalty.

Zulu Fits wraps the audience in worship rhythms of ‘Blow-up girls’ acting ‘grown and sassy.’ In their desire to pay homage to their new found African hero, Jersey Jack Black, a prisoner with celebrity, the two ‘bad’ sisters attract the ghostly moans of an enslaved man’s terror. Their home has become a cauldron of head buzzes streaking from the attic of their home, a home which once belonged to the notorious Patty Cannon. The cruel and violent past of Patty Cannon and the Johnson gang draws a sadistic picture of virulent craving, capturing and torturing of innocent people and the selling of them into slavery.

Giselle, played with incensed fire by Lauren Blackwell portrays the older sister of NeeCee, played by Yakima Rich, who with Zulu Fits makes her theatrical debut in professional Baltimore Theater. A spitfire, pulsating bundle of sporadic energy, Yakima as NeeCee lights up the stage. We learn that the two sisters plot through their Internet site for the release of Jack Black, famous for committing a ‘wrongfully accused’ crime. Bigger than life, Jack has become a cult hero to many, both black and white. Support of him has become the sister’s 2011 version of the 60’s heyday protest and insurrection martyrdom. With guns in gym bags, the two novice terrorists bring their new found conscience in defiance of the freedom they once enjoyed.

After being arrested and questioned by Agent Jackson, played by Tyrone Requer, Buddy becomes part of an FBI sting operation aimed at gathering information on domestic terrorism. Requer as Agent Jackson handles his role with steady awareness and dead on skill. Jersey Jack Black, played with stealth and menace by Marc Stevens, completes the dance of certain death.

Zulu Fits is worth the price of admission. The play, set within a black box and tagged with a white screen for iPod in the minute video viewing is striking and brings the attention where it should be on the action of the play. There were good sound effects supplied by Prince NO-RA. I like a phone that rings when it should.

Zulu Fits will bring back memories of the ‘good ol’ days’ when we imagined heroes were bigger than life – just before we learned there are no heroes just us in heroic situations. I left buzzing with thoughts, questions and conversation. That’s as good as it gets!