You never know what’s going to happen in life and Stephen Sondheim’s A Funny Thing Happened on the Way to the Forum, is a can’t-miss comedic reminder of our true lack of control. Burt Shevelove and Larry Gelbart’s book is usually a laugh-a-minute, but with Director Zina Bleck’s first musical with Zemfira Stage, the over-the-top production was a bit lackluster. The cast definitely put together a wonderful show, and their chemistry brought the whole thing together by the end. 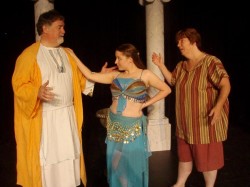 Jim Mitchell, left, Colleen Connor and Denise Mattingly in ‘A Funny Thing Happened On The Way To The Forum.’ Photo courtesy of Zina Bleck.

The slave Pseudolus (played by Jim Mitchell’s. His flawless vocals were the best of the evening, but could not be topped by his comedic timing) plans to earn his freedom by uniting his Master Hero (a moping and detached and vocally disappointing performance by Eric Worcester) and the lovely virgin Courtesan Philia (an undeniably ditsy performance by Rachel Harrington, whose vocal talents were only second to Mitchell).

Comedic relief came in the form of three wildly different characters and though the laughter was there, it would be hard to say if it was from comedy or awkward sympathy. Hysterium (Denise Mattingly spot-on, nagging mother character inspired the most genuine laughs, but struggled with her vocals at points), Marcus Lycus (an irreproachably funny showing by Justin Mohay) and Senex (David Birkenbilt’s stolid, yet funny.

The three ensemble Proteans, played by Jasmine Bull, Katherine Bisulca and Rich Prien, continually stole the show with their quirky and over-the-top antics and Lycus’ courtesans, played by Colleen Connor, Samantha Reau and Bethany Michel, pulled off ‘sultry’ with a spot of class. Well-meaning neighbor Erronius was played by theater veteran Bailey R. Center. Domina was performed by the high-maintenence Meganne McCawley Johnson, and Miles Gloriosus was in the hands of Brian Johnson who did the ‘walk-the-walk’, but couldn’t quite ‘sing-the-talk.’

Musical Director Ken Farley ruled the evening, but unfortunately the cast let their eyes land on him too many times, causing noticeable lurches in the music and pacing. The simplistic set saved the production with easily understood and well-designed minimalism. And, choreographer Amy Treat easily filled the small stage with some pretty hysterical dance moves.