He plays one of the most despised men on this earth. She plays his loyal personal secretary who must testify about him in front of the Securities and Exchange Commission. Together they are mesmerizing audiences at Theater J’s production of Imagining Madoff.  I asked Rick Foucheux and Jennifer Mendenhall about preparing for their roles and working with Playwright Deb Margolin and Director Alexandra Aron. 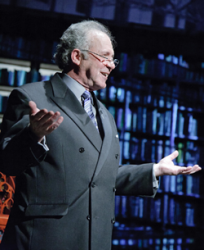 How did you both get involved in this ‘new’ production of Imagining Madoff, and why did you want to play these roles?

Rick: Like everyone else, I was intrigued by the Madoff story. I would have been happy to do a bio-drama about the whole affair, but when I saw that Deb Margolin was putting something much deeper into her play I was particularly jazzed for it. As I heard her say in a talk-back, we already know the facts of the case and we haven’t learned anything new from those. I, like Deb, was interested in a more human investigation of how and why we operate the way we do.

Jennifer: I was asked to do a reading of Deb’s Three Seconds in the Key. We hit it off, ate at an Ethiopan restaurant during the dinner break, I loved her writing, she liked what I did, and when Madoff was being cast she encouraged the director to consider me.

What is Imagining Madoff about from the point of view of the characters you play?  Rick-you play Bernard Madoff and Jennifer you play Madoff’s secretary (whose real name is unknown).

Rick: Well, it’s total fiction, that’s very important, but it’s “about” Madoff’s reflection of a meeting between himself and an older, venerated leader of the Jewish community. It’s also about the criminal justifying his life, weighing his actions and making an attempt to live with himself after the destruction he’s wrought.

Jennifer:I play an imaginary secretary, whose situation is based on the reality of Madoff’s office and the occurrence of certain events. My secretary is dumbfounded that she could work so closely with someone who did these terrible things. In the course of being questioned by the SEC, she realizes just how much she has been betrayed and lied to and taken advantage of. She sees clearly the ruin that has been made of so many people’s lives, which she feels partly responsible for, and she feels terrible about it. 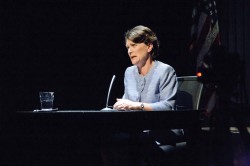 Rick: I purposely didn’t do much biographical research on Madoff  because again – that’s not really what the play’s about. Instead I worked closely with the director in trying to interpret Margolin’s play in a way that would serve her, the audience, and be honest about my own reflections of human failings and justifications. I hope that doesn’t sound too obscure – I just looked into myself, as I always try to do, to see what humanity I share with this guy. I’ve lied, I’ve been greedy, I’ve gotten in over my head – haven’t we all? – perhaps not to Madoff’s extent, but nonetheless, his failings were human.

Jennifer: No, I never do that really, if I do it’s totally unconscious. I’m a bit of a geek. I just take it from the script and see where that gets me.

Do you admire anything about Bernie Madoff?

Rick: There isn’t much to admire in Bernie. I do think he has regret, I and I do think he tried to be good to his family. I’ve tried but I find it hard to imagine what it must be like to go from his life of luxury to a jail cell. I can only think he is living in a kind of hell on earth.

Has playwright Deb Margolin visited and worked with you, and if so, what is some of the best advice she gave you about playing Bernie Madoff?

Rick: It’s always a pleasure and exciting to actually have the playwright in the room with you. Deb was present for the first week of rehearsal, then, bravely, let Alex Aron and the rest of us go to work. Alex was in touch with her almost daily to question her about some of the things that came up in the rehearsal hall. I think often a playwright doesn’t really know what she has until a troupe tries to put it on the stage, but Deb’s script was fairly finished by the time we got it. There weren’t many changes at all, and when she returned toward the end of rehearsals her input and clarification was invaluable. An actor likes to put his stamp on a role, but there’s nothing like having the one who really created it – the writer – there to tell you what was in her mind when she was at the keyboard.

Usually when a playwright visits a cast during rehearsals they bring a list of ‘Don’t do this…” What ‘Don’t do this’ did she and Director Alexandra Aron tell you?

Rick: The biggest “don’t” I got was from the director, Alex, and it has to do with a particular “actor’s habit” I always struggle with. Until I get comfortable with the character, I tend to fidget with my clothing – really weird. And the more dressed up I am, the more I fidget. So once I got into that power suit I wear and started polishing the performance, I had to sit on my hands. The resulting stillness and dignity this brings to Madoff I think is an important part of the portrayal.

Jennifer: No heavy New York accent. That was a doozie.

What is the best advice Director Alexandra Aron – who has worked before with Playwright Deb Margolin – has given you about playing your roles?

Rick: Alex had great insight into how to present this difficult character: we didn’t want to judge, to present him as a monster, or to try to justify his actions. It is a tough role. There might not have been one particular thing she said, but knowing that Alex understood the demands of what I was trying to do and then working truly collaboratively on how to achieve a meaningful acting statement is a gift I would wish for any actor in any situation.

Jennifer: Alex is incredibly sensitive to nuance. She could tell when the secretary was at just the right level of softness and when she got too tough. Alex’s best advice was not something put into words as much as a particular look she would give me when it was right. It was very helpful and specific.

Is it possible that someone could forgive Bernie Madoff after watching Imagining Madoff?

Rick: I don’t know. Forgiveness is a simple thing but unfortunately hard sometimes for a human to wrap his brain around. I don’t think that it was our intention to do that or not do that. All we ever want to do in the theatre is celebrate humanity in all it’s weird, wacky, good and bad perrmutations. Forgiveness? That’s a personal thing.

Jennifer: I think that depends on how much he took them for, don’t you?

What do you want audiences to take with them after seeing you perform in Imagining Madoff?

Rick: Like all bad guys, there’s some kind of a line separating him from me.  Where is that line, what is that line? These are questions I hope people ask.

Jennifer: I guess an awareness of putting aside immediate concerns in order to be able to actually think and reflect.

Read my review of Imagining Madoff.