Based on a Totally True Story at Silver Spring Stage

Based on a Totally True Story is about a young playwright and Flash comics writer Ethan Keene, played by Jonathan Feuer, who catches an opportunity to write a screenplay for a Hollywood movie, but his newfound success damages his relationships with his father and his boyfriend. Directed by Sam Nystrom, the show is contemporary, appealing to younger audiences, as well as experienced patrons with good acting and pop culture references. 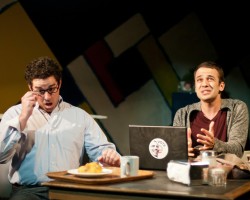 Story is a memory play made up of back-to-back narration and flashback scenes that create an intimate look inside each character’s lives. In a memorable scene, Ethan mentions his favorite cafes (in New York City, his home) to write in, which dips into a flashback set in a café where he meets his boyfriend, another writer. The transition from present to past is smooth, logical and clever, thanks to Sam Nystrom’s fine direction, and the talented cast. Jonathan Feuer (Ethan) and Cody Gabbard, as Michael Sullivan (the boyfriend), are storytelling and reenacting; they provide a picture and talk to the audience about what happened like old friends, a private bond.

This play is a five-man show in which all the actors perform well – the protagonist couple, and the three supporting characters. Ethan’s father is played by Ted Culler, Mary Ellen (Ethan’s agent) is played by Irene Molnar and Tyler (Ethan’s comics editor) is played by John Wright. They are all funny and sympathetic. Culler is hilarious, portraying the father as an awkward, funny, and unexpectedly heroic and wise. In his first scene he takes his gay son to Sears’s department store to have a serious and intimate talk in the hardware section. There are also many great moments with Ethan’s agent and with his editor – including crazy phone calls and funny dialogue. The cast did a great job.

This production of Story has enormous potential to be a hit, but there are some flashback scenes, such as Ethan’s phone call with the exciting Hollywood offer, that are too long. Despite this, Based on a Totally True Story is pleasant to watch, and has a lot of great scenes and fresh jokes that makes the audience come alive with laughter.