Pumpkin Theatre’s Charlotte’s Web invites us into the world of an innocent and curious young pig named Wilber, who isn’t just an ordinary pig. This production is both simple and captivating, keeping all the sensitivity and charm of the original children’s book. 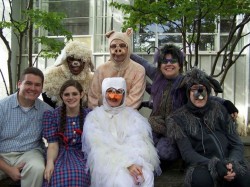 On the Arable’s farm, the loveable Wilber, played by Jonathan Richard, finds himself in danger of ‘becoming bacon,’ but thanks to a funny and warm-hearted group of friends, he avoids that terrible fate by proving he is special. One human on Wilber’s side from the start is Fern Arable, who becomes attached to Wilber on site. Young actress Sarah Winchell does a lovely job portraying the sweet country girl in her debut with Pumpkin Theatre. Wilber also meets a mysterious and crafty spider, who goes out of her way to protect Wilber by using her web as a billboard to attest what a terrific little pig he is. Shelly Work gives the role just the right tender and nurturing delivery, perfect for the sweet spider.

The actors in this ensemble are each wonderful at entertaining children, and have the ability to elicit giggles simply through animated body language. Most of the cast plays multiple roles in the show and they each get lost in every character. Thanks to Stacey Needle’s artful direction on creating physical characterization of the animals, the audience can enjoy some fun personifications of twitchy geese, a snorting pig, and a graceful spider. Tammy Crisp makes a particularly enjoyable goose. Just watching Eric Stein as Templeton, the self-centered rat, nibble on something in the background of a scene was hilarious. Derek Cooper makes a delightful sheep and is another standout in this strong ensemble. 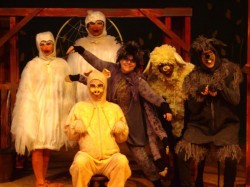 The original music written and performed by Mandee Ferrier Roberts is a beautiful asset to the production. She adds just the right bit of background piano to set the mood for each scene. Her melodies take us from dreamy and mystical web spinning scenes, which are made all the more magical by Todd Mion’s lighting, to the fun ragtime piece she plays during Wilber’s escape scene. Ryan Michael Haase’s set design is simple yet versatile, and it provides for brief set changes with Dean Davis, as the energetic narrator, moving the story along during the change, young audience members don’t even have a chance to get fidgety.

The costumes are nicely detailed and creative, and real feathers are used on the geese to Charlotte’s softly tie-dyed eight-legged ensemble, to the clever use of glasses -instead of makeup – to allow for the quick changes of characters.

E.B. White wrote Charlotte’s Web 50 years ago this year and the group at Pumpkin Theatre brings the story alive to a whole new generation of young theatergoers. As Wilbur says, sometimes it is important to “just stand still and enjoy life,” and this appealing piece of children’s theater is a great way to do just that.

Running time: about an hour.

There is a brief meet-and-greet with the characters after each performance.

There are four remaining performances this Saturday September 24th and Sunday September 25th at 1 and 3 PM, at Pumpkin Theatre,  at St. Timothy’s School – 8400 Greenspring Avenue, in Baltimore, MD. Purchase tickets by calling the box office (410) 828-1814, or filling out a ticket form online.