It’s a shame that Victorian Lyric Opera’s charming and well-sung production of Victor Herbert (music) and Henry Blossom’s (libretto) 1905 two-act operetta Mlle Modiste – ends its short run tomorrow. Mlle Modiste is about Fifi, played by Erin Winker, who is a Parisian store clerk who wants to become an opera singer, but the owner, Madame Cecile, doesn’t want to lose her best hat seller. And then to make matters worse (and complicated), Fifi is in love with Etienne de Bouvray, but Etienne’s uncle is against their union. That’ll all of the plot I am giving away. 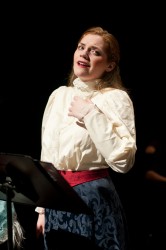 Musical Director Joseph Sorge’s orchestra of 25 exceptional musicians makes gorgeous music while the cast sings beautifully. In fact, the orchestra is so good that I could swear I am listening to a large symphony. The violin melts the audience like butter at one moment, while the trumpets blast emotion during the next. Right from the beginning – an all-women chorus opens the show and their celestial harmonies are divine, and the heavenly singing continued all through the performance until the curtain came down.

There are so many fine singing performances, but my favorites are the shopkeeper’s son Gaston, played by Jacy D’Aiutolo, belting the funny song “Ze English Language”- about all kinds of English idiomatic expressions – in a French accent while wearing a black beret and a red scarf. Baritone Blair Eig, who plays Count Henri de Bouvray, sings a rousing and assertive, “I Want What I Want When I Want It.” Erin Winker – glowing in a blue evening gown, with a tiara sparkling in her hair, and wearing a black feather boa around her neck – hypnotizes me with her sultry rendition of Fifi’s final song “The Nightingale and the Star”. 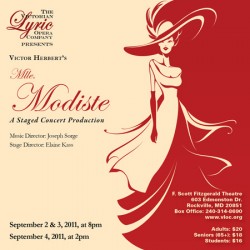 This production of Mlle Modiste has a talented cast and orchestra- and it’s light fun, sweet sounding, and a pleasure to watch. Fantastique!

The Victorian Lyric Opera Company’s  Mlle Modiste ends its run on Sunday, September 4th at 2 PM at the F. Scott Fitzgerald Theatre, in the Rockville Civic Center – 603 Edmonston Drive, in Rockville, MD. For tickets, call the box office at (240) 314- 8690, or purchase them at the door.