On the Road: The World Premiere of ‘Newsies: The Musical’ at Papermill Playhouse

I confess that the 1992 cult Disney movie, Newsies, is a piece of childhood nostalgia for me. After all, I watched the movie in middle school, sang a selection of songs from it in high school chorus, and remember my little sister, also a musical theatre freak, belting out “King of New York” in her bedroom. So, you can imagine both my trepidation and excitement when Papermill Playhouse in Millburn, NJ announced that it would be mounting the world premiere stage production of Newsies, directed by Jeff Calhoun, with a new book by Broadway great and Tony Award winner Harvey Fierstein. 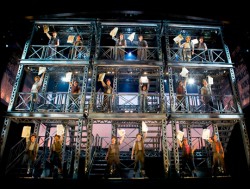 The company of Newsies: the Musical. Photo by T. Charles Erickson.

I went up to Papermill to catch a performance of the musical as I was curious as to how the theatre would present the story I knew so well on stage. Overall, it was a more than worthy attempt at presenting the familiar story in a new way and, in many cases, enhancing the source material.

Although several plot points are changed (for instance, there is a new love interest for the protagonist, Jack Kelly), Fierstein’s new book, based on the Bob Tzudiker and Noni White screenplay, still focuses on the story of Jack Kelly (who is now an aspiring artist rather than a lover of Westerns) and his cohorts, a band of downtrodden young men who deliver newspapers to New Yorkers in 1899. This thankless job helps them to survive the streets and the difficult economic times, but only barely. Inspired by a trolley strike, they organize themselves to fight against some of the most well-known quantities in the newspaper business, William Hearst and Joseph Pulitzer (played for comedy by Broadway veteran John Dossett), when they raise the price the boys have to pay for the papers they sell.

It’s a simple story based on real events. It’s also, at its core, one we’ve heard many times before – the story of a ‘David’ meeting a ‘Goliath.’ The Papermill production, however, presents this story in a new, inspiring, and earnest way, incorporating soaring ballads, a few interesting patter songs, and intense dance steps that encourage the audience to go along on Jack and the rest of the Newsies’ journey.

Jack Kelly is played by Jeremy Jordan, who will soon be seen on Broadway in Frank Wildhorn’s Bonnie and Clyde: A New Musical. Jordan is an extremely talented singer who puts enough enthusiasm into his performance to make even the Newsies skeptics want to root for him. Among his standout song performances is “Santa Fe,” in which he expresses his longing to escape his current life. The band of Newsies, including Crutchie (a likeable Andrew-Keenan-Bolger), Davey (Ben Fankhauser) and the youngest, Les (a very talented and engaging RJ Fattori, who does the matinée performances) among many others, appropriately convey the intensity and struggle of young men, trying to survive New York City. Alan Menken and Jack Fedman’s catchy songs and athletic dance steps (choreographed by Christopher Gattelli, and clearly inspired by Rob Ashford) are used to a great advantage to convey emotions and desires throughout the course of the play. 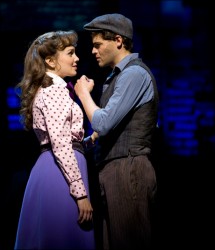 Overall, there are no weak members in the large cast. Kara Lindsay, the only female lead in a sea of men plays Katherine Plumber (Jack’s love interest in the stage play, who is also an aspiring reporter out for social justice) in an effective natural way. Her strong belt lends itself well to her ‘I Want’ song, “Watch What Happens,” even if said song does not move the story along particularly well. However, every musical needs one or two, right?

The cast of Newsies: The Musical has the opportunity to play on an interesting yet functional set designed by Tobin Ost. Industrial-like moving multi-story platforms serve multiple purposes, and when used effectively, allow a beautiful picture to emerge on stage particularly during the large numbers like “The World Will Know,” “Seize the Day, and “Carrying the Banner.” Lighting by Jeff Croiter and projection by Sven Ortel, also enhance this picture. Overall, the production values are first rate, although I would suggest this particular piece would benefit from a more intricate and impressive set – if it does have a life beyond this Papermill production due to its scale.

Menken and Feldman’s songs, many of which drew me to the source material initially, are more than capably performed by the strong cast. Although there were a few too many reprises for my liking, and I questioned the decision to open the show with “Santa Fe” rather than a more upbeat production number like “Carrying the Banner,” the songs themselves are the kind of musical ear- candy that showtune lovers crave. “Santa Fe,” which did not resonate with me in the movie version, turned out to be one of the most moving songs in this production. The new songs are, for the most part, as strong as the originals. Danny Troob’s new orchestrations serve many of the songs well – although they would probably sound even better if performed by a larger orchestra in future productions. That said, the impressive orchestra for this production was comprised of 12 very talented musicians, and directed nicely by David Holcenberg.

Papermill has a winning world premiere in this production. Calhoun and the rest of the creative team have done a remarkable job in staying true to the source material while also bringing necessary theatrical elements to bear. Papermill should be commended for taking a chance on this musical. I’d strongly urge those who loved the movie, those who found it less than stellar, and those who have never seen it to experience this show, which is suitable for the entire family. I was left extremely satisfied with my decision to attend and was left wondering if the piece will have a life beyond this production. I think there is a good chance that it can. The foundation and all of the pieces to create a larger than life and memorable musical are there.

Running time: About 2 hours and 20 minutes with an intermission. 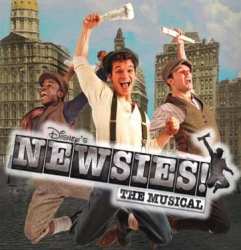 Newsies: The Musical plays through October 16th at Papermill Playhouse –22 Brookside Drive, in Milburn, New Jersey. For tickets call the box office (973) 376-4343, or order them online.

Watch a sneak preview of Newsies: The Musical.

Watch Composer Alan Menken introduce the cast of Newsies: The Musical who perform “Seize the Day” and “Santa Fe.”