Savage in Limbo at MetroStage

MetroStage presents John Patrick Shanley’s Savage in Limbo, directed by Lise Bruneau. It’s a play about five thirty-two year-olds who meet in a Bronx bar and end up sharing their desires for change in their discouraging lives.

Set Designer Robbie Hayes does a fantastic job creating the impression of a gritty bar. Exposed brick is painted into otherwise aged, grayed walls, and cracked tiles cover the floor. A lone pool cue and a couple of dead potted plants complete the setting. Sound Designer Brandon Guilliams adds appropriate ambulance and police sirens to the background as the soundboard operator, and Lighting Designer Brian S. Allard casts a scattered, dim light across the stage, adding to the seediness. Costume Designer Ivania Stack clothes the actors in reflection to their character’s personalities; from a bland work dress that borders on frumpy, to urban outfits that would not be out of place in an episode of Jersey Shore. Together, these designers create a fantastic atmosphere for the actors to work with. 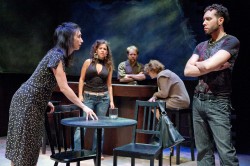 And work with it they did. Natascia Diaz practically ignites the stage as Denise Savage, an energetic and opinionated young woman that rarely stops talking and fidgeting. Lonely and stuck in a rut, Denise voices her torment (in a dead-on perfect Brooklyn accent, I might add), saying. “I see what could go wrong with everything, so I don’t do nothing.” Her energy is so palpable that I would not have been surprised to see a trail of flames following in her footsteps.

It becomes obvious that Denise is a regular customer as she wittily banters back and forth with the surly, deadpan bartender Murk, played by Sasha Olinick. They argue over the state of the bar (“Why can’t you put out some nuts? Some cheese doodles?”) when Linda Rotunda , played by Veronica del Cerro, blazes into the bar, her make-up smeared with tears. Discovering that they went to the same Catholic school, the girls bond after Linda shares her relationship problems.

The characters digress into more potent subjects, like how they all feel like their lives are at a lonesome standstill. They contemplate becoming roommates when April White chimes in, played by Jenna Sokolowski. She had been there the whole time, passed out in the corner of the bar, resembling a pile of rags. Sloppy, inebriated, and downright nutty, she proves to be another former classmate; one that once held high esteem. The women wonder how they came to their present states, and yearn to change their circumstances. In the middle of what seems to be a blossoming, promising friendship, Linda’s boyfriend, Tony Aronica, played by Michael Kevin Darnall, storms in and turns the mood sour. 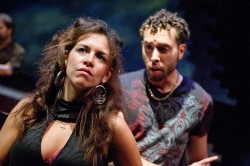 What follows is a whirlwind of emotions, including anger, rivalry, blame, distress, and angst. The characters address relatable questions that touch on fear and loneliness, and a strong desire to break free of the monotonous routine of their daily lives. Their emotions are universal and real, and the performances are strong enough to make you feel your own version of their truth within yourself – as you watch it unravel onstage. Each character holds their own, but the core of this production belongs to the women, who manage to keep your rapt attention with an almost hypnotizing effect. Given this trance, I expect that a bomb could have gone off in the next room, and my eyes would not have left the stage.

Running time: 90 minutes without an intermission.