The early 80s sparked a creative artist movement to combat the oppression whole generations felt and Christopher Durang’s Sister Ignatius Explains it All For You and The Actor’s Nightmare are perfect example’s of coal being pressed into diamonds. Port City Playhouse recognized that they are just as relevant then, as they are in today’s economic depression and brought them back to life with supreme skill. From start to finish, Director Shawn G. Byers made sure both one-act shows were filled with non-stop audience laughter and perfectly timed social punch lines the entire night.

Ric Andersen kicked off the evening with his delightful, shudder inducing experience as George Spelvin, a man who knows no lines for the play he’s never rehearsed for. Andersen hits a second home run as the alcoholic, wife abusing Catholic Aloysius Busiccio who is horrified to find out he’s the ‘best’ out of everyone in his class. Both roles fit Andersen’s slouching demeanor and downtrodden expressions, but his never ending grin was enough to keep the audience from all out pitying him. 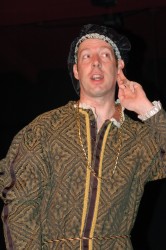 Ric Anderson in The Actor's Nightmare. Photo by Frank Pasqualino.

Amy Solo flirts her way into the audience’s lives with humor and bullseye delivery as Sarah Siddons, but her real moves came out as Sister Mary Ignatius, the ball twisting, sugar coated nun from School Days past. Her wildly overbearing, pig headed attitude fit the role perfectly and Solo easily earned the most laughs of the night. Her delivery was everything we were hoping for, and more, a true showing of an infallible figure slowly crumbling in around it’s shattered reality.

Remy Brettell held back nothing as the adorable Thomas, Sister Mary’s pet pupil. Obediently reciting catechisms in exchange for cookies, Brettell manages the most honest performance of the evening, as concepts of the show went over his head to the audience’s amusement. Without the authentic child on stage, the show would have suffered a bit, but together the ensemble cast presented the perfect package.

Aimee Meher-Homji(Diane Symonds, Ellen Terry) rocked the stage in heels all night and all eyes immediately turned to her when she as much as scowled. Filling in for several colorful characters throughout the two shows was a seamless breeze for Meher-Homji and one couldn’t wait for her to appear on stage again. Meher-Homji topped herself as the philosophical trash can inhabitant bantering with a confused Andersen.

Larissa Norris (Meg, Philomena) floats from humorous character to humorous character, but really shines as the temperamental ‘Maid’ who begrudgingly feeds Andersen  a couple of those forgotten lines. Norris sweet temperament gave each role a sense of balance and she fit perfectly in each scene like a puzzle piece. Jason Wonacott (Henry Irving, Gary Sullavan) also took on several roles as if they were made for him, though his performance as an unrepentant Catholic homosexual was the most moving piece of the evening. 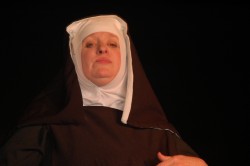 Clever use of costumes by and the simplest set work of seal the piece together as a perfect consisive evening of laughter and a little self realization. A flat out 5 stars for six rousing performances and non-stop chuckles and guffaws for all.

Sister Ignatius Explains it All For You and The Actor’s Nightmare runs through October 2nd at The Lab at Convergence – 1801 N Quaker Lane, in Alexandria, VA. For tickets purchase them online or call (703) 838-2880.