No Rules Theatre Company’s Stop Kiss is a delight. How often can one say that of a play that tackles a serious issue? How likely is it that one could ever say that of a play structured around the brutal beating of a young woman? Nonetheless, Stop Kiss is funny, engaging, poignant, and deft, as it explores the sexual awakenings of two women and the violent response to a kiss between them in a public park.

In less masterful hands, this material could be tedious. But Diana Son, C0-Executive Producer and writer at Law and Order: Criminal Intent, is a clever playwright. Rather than arranging the story chronologically, the scenes shift between the aftermath of the attack – which is not shown on stage – and the development of the relationship between Callie and Sara that leads, finally, to this kiss. Shot through with an appealing, quirky humor and peppered with New York jokes, the play settles lightly as a pigeon on its heavy subject. 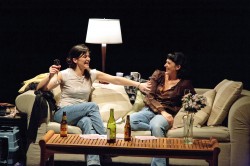 At its broadest, Stop Kiss is about how to have a voice as a woman, how to speak in your own defense, how to answer the question “What do you want?” Sara, recently arrived from St. Louis, does not know New York City, but she does have a firm grip on these basics. As Callie helps orient Sara to the city, Sara teaches Callie how to assert herself. And finally Callie does. She kisses Sara. A man who sees the kiss insults them, Sara answers back, and the man exacts retribution. But the last word belongs to Callie and Sara and their love.

No Rules Theatre Company, which received The John Aniello Award for Outstanding Emerging Theatre Company from the Helen Hayes Awards last year, does an excellent job with all aspects of the production.  Making her directorial debut, renowned Washington actor Holly Twyford finds and amplifies all the possible moments of humor, and with sensitivity and subtlety lets the poignant moments resonate. She keeps a brisk pace. Costume and scene changes are integrated into the action or carried out with unbelievable smoothness and lightning speed (Sara, clad in street clothes, steps behind a doorway and emerges less than five seconds later in hospital garb). The Stage Manager, Eric Arnold, must be very good.

The play is well cast. Rachel Zampelli brings a down-to-earth humor and an appealing mixture of haphazardness and strength to Callie’s role. Alyssa Wilmoth is believable as the sturdy and world-wise Sara. After the attack, although she has no lines, she manages to portray her state of mind quite well, even though she holds part of her face still, as if she didn’t have full access to its movement. Callie’s sometimes boyfriend George (Ro Boddie) is a strong actor. Though his lines are fewer than Sara’s and Callie’s, his gestures and expressions are eloquent and to the role of concerned and perplexed boyfriend he brings humor and presence. Jonathan Lee Taylor could not be more convincing as Sara’s tedious, straight-laced, earnest, and smothering ex.  And Howard Wahlberg nails his role as the tough Detective Cole. 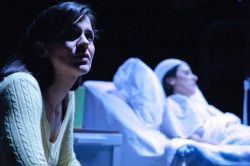 The costumes, designed by Frank Labovitz, almost play a role themselves, as Callie changes time and again, seeking her truest, most attractive self, looking for what fits.  The set, by Tony Cisek, is beautifully simple and neatly functional. What serves as a wooden coffee table in Callie’s apartment becomes, when it is moved a few feet, a bench in a hospital corridor. The kitchen table in Callie’s apartment, with no change whatsoever, serves as a table in the detective’s office and a table in a coffee shop.  The hospital bed stays on stage throughout, a menacing reminder, the bedroom’s distorted mirror image.

No Rules Theater Company, only in existence for three years, has put together an exacting, exciting production. It is hard to imagine how this play could have been done better. Go see this play. Every minute is worth it.