The 2011-2011 season at The American Century Theater takes a dramatic turn with its production of Clifford Odets’ The Country Girl. Clifford Odets’ powerful play, often considered a ‘modern American classic’, is as relevant today as it was during its Broadway debut in 1950. These days, as celebrities are constantly in the tabloids for addiction and rehabilitation stints (and even rehab failures), I might be more jaded than if I had lived in the era when this play first debuted, and such things were not so widely discussed. However the raw and varied emotions of the individuals involved and the impact of substance abuse is as powerful a topic today, as then. The seemingly natural dialogue disguises deep and fractious problems and misconceptions involving the main characters. 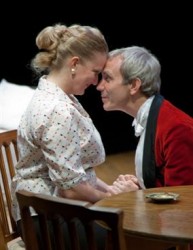 The story involves the complicated career and marriage of the washed-up, alcoholic actor Frank Elgin (Brian Crane) who receives a lucky break from the young and up-and-coming director Bernie Dodd (Kevin O’Reilly). Frank is offered the opportunity to star in the leading role of Dodd’s promising new play. By this time, Elgin had long since destroyed his thespian career by heavy drinking, so this risky choice of lead actor is not endorsed by Playwright Paul Unger (Christopher Holbert) or Producer Phil Cook (Steve Lebens). As he has been doing since his career has soured, Frank blames all his woes on his wife Georgie (Vanessa Bradchulis), who he claims is mentally unwell, an alcoholic, and suicidal.

Brian Crane (as Frank Elgin) captures the duplicitous nature of many alcoholics who have a different face in their professional or social lives from that of their home life. Brian credibly portrays the dramatic ups-and-downs that often accompanies those with substance abuse issues, and (dare I say it) the co-dependent nature of his relationship with Georgie seems ‘spot on.’ Vanessa Bradchulis proves her emotional range in her portrayal of the many facets of Georgie. The character merges many roles – the stoic and supportive pillar of her husband’s career, the careful interloper trying to keep Frank off the sauce, the woman seeking love, and the loyal wife standing by her man. Kevin O’Reilly is fabulous as the over zealous and young director Dodds. His misconceptions of Georgie and Frank’s relationship and his discovery of the true nature of their partnership is convincing. Kelsey Acers as Nancy, and Arturo Tolentino as Larry ably support the other actors. 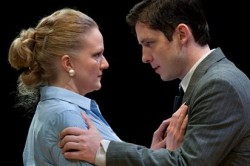 Patrick Lord’s minimal set design as well as Marianne Meadows’ Lighting Design is minimal, which allows one to concentrate on the evolving drama and tensions between the characters. The intimate Gunston Arts Center’s Theater Two allows you to be totally immersed in the story. Dennis Kitmore’s costumes are true to the times, as he dresses the actors in period clothes.

The Country Girl is a well-crafted drama that involves dependency, deception, lies, and loyalty. Artistic Director Jack Marshall’s choice of The Country Girl keeps to the American Century Theater’s commitment of “promoting 20th century theater as a vital part of our cultural dialogue.” The show is an intriguing portrait of human frailties and their consequences.