The Mandrake at Faction of Fools

Faction of Fools creates great comedy and great art. I have been watching this theater company develop for two years now and they continue to break both boundaries and new ground. The new ground broken was at Galludet University where Faction has become the theater company in residence. Their first undertaking at their new home is The Mandrake – a play by a man who was anything but a fool. Machiavelli was notorious for being one of the most manipulative and savvy politicians of his day. And it is with savvy that Faction manipulates both the script and the characters to bring this show to an audience a few hundred years removed from its italian origins. 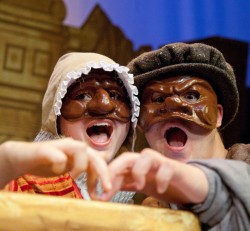 Our story begins with several lengthy monologues given by Friar Timoteo (Daniel Flint), Lucrezia (Allison Galen), and Callimaco (Tyler Herman) explaining what’s going to happen, who the characters are, and their relation to each other. While this part is a bit slow, the pace picks up dramatically when you start adding several new characters into the mix. Ligurio (Matthew R. Wilson) appears and is immediately identifiable as the rogue of the bunch due to his slick moves (he manages to keep a moneybag out of the clutches of the lecherous Friar for the better part of an entire monologue though the holy man is practically crawling over him to get it) and slicker tongue.

The story adds trouble on trouble as we realize that there are three pairs of lovers in the mix: Callemico and Lucrezia (who is caught in a loveless marriage with Nicia [Jesse Terrill]), Friar Timoteo and Sostrata (Barbara Papendorp), and Siro (Charlie Ainsworth) and Fiorina (Miranda Medugno). Using their feelings for each other and the stupidity (and cupidity) of Nicia, Ligurio hatches a scheme that eventually leads to a delightfully satisfactory conclusion leaving the audience both happy and a bit puzzled.

One note on the performers: The actors playing both Siro and Fiorina are deaf students at Galludet University. They manage to add dramatically to the show without ever speaking a word. Siro is used as a sounding board by the romantic Callimaco (Siro is his servant) while Fiorina is handmaid to Lucrezia. Their love story is told solely through movement and is by far the sweetest of the three even after Fiorina is manhandled into Siro’s house and comes out a bit rumpled.

Daniel Flint’s portrayal of the filthy Friar leaves you convinced that every representative of the church in Machiavelli’s era must have been corrupt and appalling. The totally nonchalant way he presents the sex-crazed monk and the fact that no one seems to bat an eyelash at his constant trysts with an equally debauched Barbara Papendorp – leave you vaguely disturbed at the state of the church in the 16th century.

Then we have the main event: Callemico’s attempts to win the heart and body of Lucrezia as she suffers under her current husband, Nicia. This involves disguises, deceit, a potion, a lot of gold, and some urine. Allison Galen gives a great counterpoint to the rest of the cast as an earnest and devout young innocent (especially when she explains why she’s on her knees for 4 hours every day). Her introspective monologues give depth to a show where most of the characters think only with their loins or money pouches.

Finally, we come to the performance that ties all the stories together. Matthew R. Wilson shines in Commedia roles. His quick wit and comedic timing bring a real ebullience to the stage and coax an exuberance out of the audience that would otherwise be missing from the show. From the moment he enters the stage, Matthew breathes life into the scenes without overshadowing the other characters on stage.

So while there were some foibles (a few missed lines) and the energy of the piece wasn’t always pitched precisely where it should be to truly engage the audience, the show was truly a success. Faction of Fools continues to grow and create new and wonderful work from both original sources and 500 year old political scientists.