The Stenographer at Venus Theatre

Zoe Mavroudi’s The Stenographer, only her second play, in its world premiere here at Laurel’s Venus Theatre, features as its centerpiece one huge confession. It is a play about the writer and the person that shares the writer’s pen. They say that for every great man in history there’s a greater woman behind him. A theme of this play, the saying comments on not just historical sexism, but is a kind of riff on the other saying: no man is an island. We do nothing alone, we write nothing alone. The man in the story of this play is a writer and the confession he makes about his work is, in many ways, the play itself. 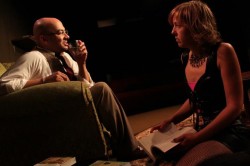 Frank Britton and Amy Rhodes in The Stenographer. Photo by Agnieszka Szostakowska.

The play is one long scene, played out in real time, featuring a slow build-up to the event of the confession itself. The confession is a shared moment between the only two characters on stage in the play, the Professor (Frank Britton) and the Girl (Amy Rhodes). The Professor is revealing something to the Girl, slowly, steadily, unforced.

The setting is the Professor’s suburban college town home, and the style is very traditional realism. Amy Rhodes also was the Scenic designer, and her set, though detailed, shows a relatively spartan life of this professor, in a small home that has likely very few rooms, with this one acting as both study and living room. Immediately, we the split audience are there with these two characters, with Venus’ oft-used alley, or traverse, staging, watching them and watching the other half of the audience reacting to their unfolding situation. What is essentially a peaceful, thoughtful, private man’s environment becomes gradually a space of well-conveyed inner turmoil.

Britton, one of DC’s most recognizable and unique character actors, gifted with an appearance that allows him many types and ages, here transforms into a man of years and accomplishment, undoubtedly the academic he is supposed to be. However, as the Professor speaks, he is haunted, and the play allows a very subtle performance to smolder right the way through until his inevitable release. This character could not be more light years from what one might have seen Britton playing in WSC Avant Bard’s Fringe show Hotel F*ck – just a few weeks ago.

Rhodes’ Girl manages to be very much an unexpected foil for this man, attentive and like a student, but with a more complicated background than some co-ed inappropriately up too late with her advisor. Dressed to party, with a pink lock or two, she does resemble an early 80s sort of Tootsie era Teri Garr – good-looking and down to earth, but too complicated and intelligent to be some mere fawning student oddly dressed in a stripper’s get-up. As the proceedings unfold, it is clear that her presence, as a muse as much as audience for him, is what allows the Professor to confess.

There is a great deal of Fyodor Dostoyevsky’s classic novel Crime and Punishment thrown in to keep the characters and the audience focused, and guessing, as to what the relevance of the literary connection is as much as to establish precisely what sort of world we are in. In fact, the show starts with it.

In media res, with the evening already well underway – something has happened between these two people that gives them some understanding, some connection. It is late, past midnight. The alcohol is already broken out, and a long, barely interrupted speech from the professor on Crime and Punishment continues. This preamble to confession is necessary, though it takes some time to get there with these very quiet performances, committed as they are to what develops. Some answers are never given too specifically, but the suggestion is clear that this scantily clad girl is on the clock, so to speak, and may well be there for more than just an ordinary night’s work.

The Professor reveres the natural, open method of psychological analysis, allowing the protagonist of the novel, Raskolnikov to fall into his own crime, allowing his misdeed to come to fruition the way that so much wrong does happen, naturally, unforced, premeditated but rationalized. Crime is clearly here as a subject, but the confession of said crimes is the point.

This is a realism here, in fact, well supported by the performances and the set, all very reserved and contained, but extremely honest. Traditional realism is really in the roots of this play, too, as it calls back Ibsen, no less, and a classic work such as Ghosts, where there are very few characters on stage, but many in the play, as narrative in the discussion of the past brings back the the Professor’s wife, Dostoyevsky himself, his wives, his stenographer, and the fictional character of Raskolnikov, amongst others. As with the developments in that play, the past is prologue, and the events of this one night mark a tragic end and new beginning.

Words must be given to Marilyn Johnson’s Costume Design for this show, with exquisite storytelling done simply in the two characters’ appearances, telling the oddity of their encounter, and the somewhat scandalous nature of it, with only this perfect contrast in apparel. The staid professor entertains the professional woman of the night.

Do not expect a wild ride through cathartic fire in this show, though. This, another play at Venus directed by Deborah Randall, Artistic Director and primary force of this noble little theatre company, was designed to provide thought for dealing with our sins – thought more than pity. The writer and stenographer relationship which inevitably kindles between these two figures, who, left nameless beyond mere descriptors of “professor” and “girl”, might be any of us.

The Stenographer plays through September 25th at Venus Theatre Play Shack – 21 C Street, in Laurel, MD. Tickets, which are general admission, are $18, and can be purchased at the door or online.

Read an interview with the Playwright and Director of The Stenographer.