Wait Until Dark at The Vagabond Players

Wait Until Dark is a chilling tale of survival that has lasted forty-five years as an exemplar of suspense. When executed well, it is quite a sight. During the intense climax in the second act, it’s what you don’t see that is most frightening.

Written by Frederick Knott, Wait Until Dark takes place in 1966, and is about Susy Hendrix, who is a blind Greenwich Village resident. She and her photographer husband Sam have been working hard to adjust to her recently acquired handicap – when a murder takes place on their street. This reignites Susy’s feelings of helplessness and paranoia, which turn out to be well-founded. Three criminals plan to take advantage of her situation, and her only confidant is Gloria, a nine year-old girl who lives upstairs. 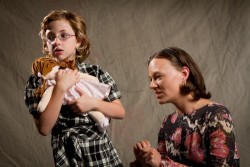 The brainchild of the con is Roat, played by Christopher Cahill. Cahill, with his dominating stature, black sunglasses, and ominous line readings make for an intimidating villain. If Cahill left anything to be desired, however, it would be subtlety. April Rejman, on the other hand, expertly injects her seemingly sunny character Susy with shades of impatience, anger, and jealousy. Being blind, Susy has to remain constantly vigilant or else become a victim, and her struggle to outwit the three con men is gripping. Mike, the most responsible of the three, is played with grim empathy by Leonard Gilbert. His performance is also three-dimensional, since his character is must decide between self-preservation and compassion for Susy. Carlino, the third criminal, is played by Torberg M. Tonnessen. He provides a measure of levity to punctuate the suspense. Another source of comic relief is Isabelle Anna Herlinger’s performance. Even at such a young age, Herlinger has the chops to play Gloria as insolent and sympathetic at the same time.

The lighting by Bill Price in this production is flawless. The difficulty level is raised since the lighting is so important to the plot and the mood. As the play progresses, this mood becomes one of impending violence. Contributing to this effect is the dark color palate of the set, courtesy of Set Designer Bill Price, and constructed by Tony Colavito and Jay DeMarco. The walls are a mottled black and grey. There is a black couch center stage, and behind it a grey kitchenette and a door at the top of a short set of stairs. The props include flashlights, matches, and knives. They are integral to the plot, are expertly coordinated, and add an extra layer of reality. The only object that broke this illusion was the luminous ‘Exit Sign’ next to the stage, which can’t be helped but does blunt the effect of the final scene. The director, Allan Herlinger, attempts to put the audience in darkness to mirror Susy’s plight, but the actors can still be faintly seen even when the lights are completely down.

The Vagabond Players’ Wait Until Dark is an entertaining production, well worth seeing – especially in the dark.