Christopher Durang’s dark comedy Why Torture is Wrong and the People Who Love Them might be the perfect play to watch around September 11. The comedy touches on by products of 9/11 American paranoia, racism, and shadow governments in a realistic but stretched view which only a politically incorrect drama could do. 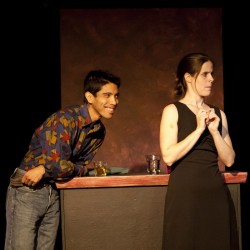 The play is about Felicity, played by Vanessa Strickland, who in a drunken stupor (or drugged?) marries Zamir, played by Joey Ibanez. If waking up being married to a complete stranger is not enough, Felicity cannot even decide if her new husband is a terrorist, a criminal, a crazy man or some combination. Some concern is brought on due to her husband having a parole officer and a volatile temper. Some of it is due to Zamir’s Pakistani ethnicity. However, is Zamir as frightening as Felicity’s gun-toting father, played by Tim Seltzer, with his paranoia and shadow government ties?

Director Gene Fouché directs a talented cast. Vanessa Strickland gives a serious, emotional, and believable take on her character Felicity. Joey Ibanez also delivers the emotion but with a comical flare. My favorite supporting character is Reverend Mike, portrayed by Reiner Prochaska, a humorous and calming presence who adds climatic drama at times during the production.  who adds climatic drama at times during the production. His “Porn Again Christian” line may have garnered the most laughs – but his interaction with Tim Seltzer is among the play’s best moments. Julie Herber does an amazingly wonderful job as Felicity’s mother Luella. She plays the easily distracted mother stuck in her own theatre world. And lastly, Matt Lee does his best as the narrator and the bartender.

The Maryland Ensemble Theatre is a wonderful place to see a show. The seating is intimate without a bad seat in the house. Set Designer Joann Lee’s minimal set allows the acting to take center stage.

Why Torture Is Wrong And The People Who Love Them plays Thursday through Sunday until October 2nd at the Maryland Ensemble Theatre – 31 West Patrick Street, in Frederick, Maryland. For tickets call (301) 694-4744 or purchase them online.