If you read anything these days, on the internet or otherwise, you’ll find that America is declining, downsizing and generally muddling through a recession. Woolly Mammoth Theatre Company is devoting this season to staging plays that explore the following question: “Does our civilization have an expiration date?” 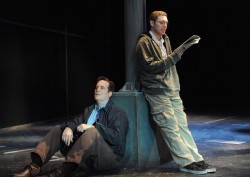 Will (Michael Russotto) and Alex (Joshua Morgan) in Woolly Mammoth's production of 'A Bright New Boise.' Photo by Stan Barouh.

Samuel D. Hunter’s A Bright New Boise, directed by John Vreeke, opens under fluorescent lighting courtesy of Colin K. Bills. Pauline (Emily Townley) is interviewing Will (Michael Russotto), who has applied for a job at the local Hobby Lobby craft store that she manages in Boise, Idaho. Townley is riveting as the crass Pauline, who laughs at her own jokes, sticks her prehensile tongue out, disparages workers’ unions and won’t let Will get a word in edgewise in his own job interview. “I’ll put you on full-time as soon as I can. Until then you work thirty-eight hours a week,” Pauline cheerfully tells Will.

Hunter’s play has a frustrating push-pull dynamic, alternately drawing me in and then pushing me back with its affected plot points. Will tells his young, asocial co-worker Alex (Joshua Morgan) some news about his father at the close of the first ten-minute scene. Shortly after, another co-worker, Leroy (Felipe Cabezas), corners Will and tells him some more family news and that Will should steer clear. It’s the nuances that this production gets just right. Russotto’s soft-spoken, patient, hesitant Will, an excellent listener, is not your ‘typical’ fanatic. When his tight-lipped, hunched co-worker Anna (Kimberly Gilbert) begins to bond with Will after hours in the Hobby Lobby break room, he allows that he is working on a book online (“Holy crap! You write books? I read books!” she says). After he has read a working excerpt to her and Anna tears up, telling him it was “amazing,” he tells her that it is inspired by his faith. “I’m Christian…what else is there to believe in?” Anna says, shrugging it off. It is only when Will reveals the extent of his faith and his readiness to embrace the potential Rapture that Anna feels cheated out of a rare moment of genuine emotional honesty. I can sympathize; the same feeling came over me.

The acting was terrific! Joshua Morgan is a gifted actor who can convey the instability of his character physically (when Alex is in the throes of a convulsive panic attack) and through a taunting, yet insecure, monotone delivered with his eyes slanting downwards. Kimberly Gilbert does neurotic so well; it is touching and hilarious to watch her Anna talk halting circles around herself in her search to find intimacy with others. Felipe Cabezas is eery as the wound-up provocateur Leroy; how can we trust someone who gets his kicks from deliberately making others uncomfortable? 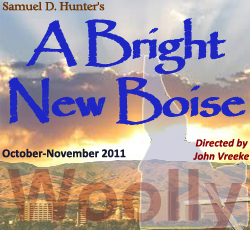 Misha Kachman’s set and Chris Baine’s sound design ably evoke two scenes – a barren parking lot replete with humming lights, the sound of cars passing in the distance, ominous clouds crashing into each other above and chirping crickets and the break room of the craft store, where the employees, clad in blue vests with name badges affixed to them (designed by Ivania Stack), lash out at each other. A TV sits perched atop two adjoined lockers running continuous footage of two higher-ups in the Hobby Lobby company (Michael Willis and Michael Glenn) touting the virtues of their business as if it were a community bulwark. The footage is frequently interrupted by video of ongoing surgeries at a local hospital. Somehow, faith, or something like it (Pauline’s version of it), has designed to cross wires with science within the four walls of a craft store in the Midwest. The result sparks something spectacular.