A Few Good Men at The Heritage Players

I guess it has to be said, men in uniform are still a thrilling sight. The Heritage Players production of A Few Good Men, breathes fresh air into a show that most everyone has seen on film  I’ve got news for you – Aaron Sorkin’s  stage version is so much more powerful than his screen adaptation. 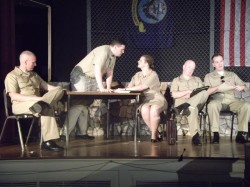 The cast of ‘A Few Good Men.’ Photo by Wendy E. Meetze.

Director Katie Sheldon has done her company proud. Each character is fully focused on the action of the play. Let’s give a rousing cheer to DC Theatricks who dressed the actors authentically enough for them to spend duty time in the Navy and Marine Corp! The Navy white summer dress with imposed camouflage vests for safety’s sake – set just the right tone for the bizarre conditions in play at Guantanamo Bay – just across the waters from Florida.

Notable on stage were the accused, Lcpl. Harold W. Dawson (Damien Gibbons) and PFC USMC Louden Downey (Jim Gerhardt).  Both actors were US Marine Corp believable and carried the audience through their gut-wrenching search for the truth when pushed violently against the order given — Code Red!

Aaron Dalton gives a jaunty, self assured, mildly cocky breeze to his role as the young inexperienced trial lawyer, LTJG Daniel A. Kaffee. He shows his willingness to take on the responsibilities of a trial where abuses of rank and loyalty to ‘Unit, Code, God and Country’ have displaced good conscience. Kathy Wenerick-Bell as his sparring partner and co-defending attorney brings ‘couple magic.’ What I found lemon-twist-fresh was the difference afforded them by the stage script. The two characters, with ping pong athleticism, brought the dilemma of Dawson and Downey into combat readiness. She reminds Kaffee, “don’t make a deal, make an argument.”

Through her persistence in digging for the truth, we learn how and why Marine William T. Santiago died. Understated, but necessary to the balance of the trial laced with poisonous conspiracy was LTJG Sam Weinberg, played with great comedic timing by John G. Sheldon.

Stephen Deininger must be saluted for his characterization of LtCol Nathan Jessep -the stiff, buttoned upper-lipped controlling officer who gave the order, “Code Red.” Deininger was outstanding in his portrayal of an unyielding Marine Officer – despite the fact he has the face of an angel. It was a little unsettling, and played right into the spirit of the play.

Matt Scheer, as the prosecutor, 1stLt Jack Ross, brought a relaxed, polished, country club air to his role. He gave the audience the feeling that he had everything in hand though obviously, in the end, he did not.

Brian Mellen as Cpl Jeffrey Owen Howard also gave a great performance. The entire company was on point and assisted by the talents of Set Designer, Ryan Geiger. The multilevel risers gave mixed use to scenes from Kaffee’s apartment to the tense courtroom to Guantanamo Bay.

Nothing falls short in this production accept the long length of the play. Thankfully, there are many stimulating moments like the sight of the Marine Core flag and the United States flag standing tall behind the chain link fence. In place throughout the show, it reminds the audience that the primary dedication of the Marine Corp is to protect America’s interests regardless of the sacrifices.

You need to see these powerful performances. The Heritage Players gets a roaring “Oorah!” for its production of A Few Good Man!

Running  Time: Approximately 2 hours and 15 minutes, with one intermission.