The cast of the Elden Street Players production of A Midsummer Night’s Dream is a complete feast for the eyes and ears of the audience. Michael Schlabach captures Director Evan Hoffmann’s rule, “If it might make the audience smile, let’s try and use it,” with his masterful set design, which includes a dreamy painted floor, a slide, ladder, and a pole – which the cast puts to full use. 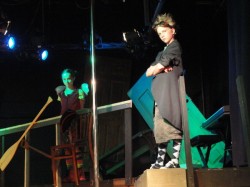 Producer Theresa Nichols Bender and Director Evan Hoffman had great success previously in their WATCH Award-winning production of Metamorphoses. They did a wonderful job again with “A Midsummer Night’s Dream. They encourage the actors’ to extract every laugh Shakespeare’s comedy has to offer. The stellar cast is afforded the opportunity to have fun, which allows the audience to enjoy the production even more.

Ian Pedersen is energetic and outstanding in the role of Puck. It’s the teenager’s first performance with the Elden Street Players. However, Ian is no stranger to the stage. He has performed with the Reston Community Theatre, the Synetic Theater, The Shakespeare Theatre, the Ambassador Theatre and The National Theatre of London. He was flawless in his monologue scene and delightfully entertaining as he delivered the various love potions. [He’s also a personal favorite of our Editor Joel Markowitz, who honored him several times in his ‘Scene Stealers articles on DCTS].

The intense rivalry between Demetrius (Jack Sossman) and Lysander (Brian M. Garrison) is a sight to behold. Some of the plays most entertaining moments come when these two escalate their differences and wrestling breaks  out. Both actors contribute much more to the play than their horseplay. Jack Sossman is at his best when being chased by Helena (Cassandra Hodziewich) and his comedic expertise delivers roars from the audience. Brian M. Garrison brings more laughs to his performance as Thisbe in this play-within-the play. His cross-dressing scene had the audience in stitches.

Cassandra Hodziewich is enthralling as Helena when pursued by Demetrius. Her acting is equally up to the challenge in her rivalry with Hermia (Jaclyn Young). Jaclyn Young demonstrates incredible range with her acting and comedic talents. My favorite scene with Jaclyn was when she confronts Helena.

Adding to the fun – Michael Reid (Oberon and Theseus) and Jessica Sperlongano  (Titania and Hippolyta) together make a tremendous team. Near the end – when they watch the play within the play – they actually take seats within the audience. The added interaction works well in the intimate Industrial Strength Theatre. Jessica’s relation with Allen McRae’s donkey-faced character also emits many laughs.

Allen McRae (Nick Bottom and Egeus) shines – especially when he’s making an a*s of himself. Allen’s over-the-top and hysterical dying scene was the highlight of his performance. I am looking forward to seeing him in major roles in future productions.

The cast delivers sensational performances while (probably) burning 1,000 calories during this performance. There is never a dull moment as lovers chase each other down sliding poles and over playground slides – while rivals spar with one another – all before the audience’s watchful eyes.

It’s a dream of a production. Shakespeare would have been proud! 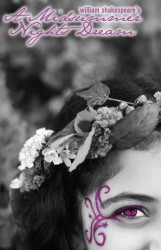 Watch a video preview of A Midsummer Night’s Dream.

Watch a video preview of A Midsummer Night’s Dream.