‘A Quick 5’ with Amal Saade

Amal Saade is a young actress with an amazing talent. She has appeared at Theater J’s Mikveh and The Moscows of Nantucket, and just completed a run of Much Ado About Nothing at Taffety Punk. By day, Amal is the Program Manager for The Theatre Lab School of Dramatic Arts.

When did you start acting? 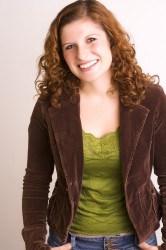 I started acting when I was about 5. My parents put me in this camp called MADD (Music, Art, Dance, and Drama) at The Children’s Theatre of Charlotte where I lived at the time. I loved it. I was really shy as a kid, so come to think of it, it seems a little umm, peculiar that they would put me in that camp, as opposed to say computer camp where I wanted to go (you got to play Oregon Trail all day), but I guess they knew what they were doing.

How did you come to be involved with Theatre Lab?

One of the first acting things I did when I moved to DC back in 2005 was a staged reading with Kim Schraf who I thought (and still think!) was pretty magnificent. She mentioned her students at The Theatre Lab and all the hard work they were putting into their training in The Honors Acting Conservatory. I was confused about a lot of things at the time (Should I go back to school? Find a “real job”? What exactly am I doing with my life?, etc), but hearing Kim speak about her students was a rare moment of clarity for me. I wanted to be one Kim’s students at this so-called Theatre Lab place too. And once I met Deb and Buzz, the co-directors of The Theatre Lab, I wanted to be one of their students as well!. So I auditioned for the Conservatory the next year and never left. (Don’t worry, I did actually graduate from the program, but now I work in the youth and outreach programs and really love it.)

What kind of plays do you like to perform in?

I’m not sure I have an actual preference… Up until a couple of months ago, I probably would have said that my preference is to work on anything contemporary, but that recently changed when I got the chance to do Much Ado About Nothing at Taffety Punk earlier this fall. I had such a good time with those Riot Grrls! I definitely gained a much greater appreciation for Shakespeare doing that show (I know I should have already had it planted in me years ago, blah, blah, blah), but well, I didn’t. There was something about being surrounded by such a talented group of women, who knew really knew how to both completely master the language and play with it at the same time, that inspired me to try and do the same (because I wanted to play with them!). Don’t get me wrong, I still really love working on contemporary plays, especially brand new plays where you have the unique opportunity to originate a role and sometimes even work with the playwright, but I just feel like I now have a better appreciation for both contemporary and classical as opposed to having a strong preference one way or the other.

Is your preparation process pretty much the same for every show, or does it vary by production? 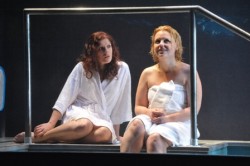 It’s the same in the fact that no matter what the play, I usually start by finding the points of intersection between myself and the character. Discovering how we’re alike – how I can really commiserate with the character – serves as an entry point into the play for me. Sometimes this is easy, like with Sarah in The Moscows of Nantucket (we had a lot in common!) and sometimes it’s more difficult, like with the Friar in Much Ado. But I have to trust that I’ll find these points of intersection eventually. Then I can go forward and do whatever dramaturgical work is necessary for the play, which often gives light to differences or points of divergence between myself and the character.

For example, in Mikveh at Theater J, I started by finding my connections with Tehila (the most obvious one was that we were both about to get married!) and then it was hugely important to do research into the lives of Israeli Orthodox Jewish women, so that I could begin asking myself all those great “what if” questions. What if I was about to be married, but had barely met my finance, had no form of “sex education,” and was expected to almost completely transform once married?, etc, etc. Then of course my favorite part of the whole process is in the rehearsal room. That’s where it gets juicy.

Is there one particular role you can’t wait to be 20 years older – so you can play it?

In college I had the time of my life playing Maria Josefa, the kooky grandmother in The House of Bernarda Alba. I would love to play that role again and actually be age-appropriate! I may have to wait another 40-some years for that though.