‘A Quick 5’ with David Dower

David Dower is the Associate Artistic Director for Arena Stage. Along with Molly Smith Arena’s Artistic Director – David has helped produce some of Arena’s biggest productions. Oklahoma, Ruined, Trouble in Mind and Every Tongue Confesses are just a few of his achievements. He has collaborated with monologist Josh Kornbluth on many productions, most recently Andy Warhol: Good for the Jews at Theater J. David is one of the most visible and approachable people at Arena Stage. 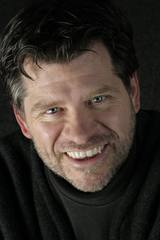 How many years have you been at Arena Stage?

I am in my sixth season here.

You have been Josh Kornbluth’s collaborator for his one-man shows. What is the creative process like?

A blast! He will float a basic theme for the new piece and then start doing improvisations around that theme in people’s living rooms, small theaters, open mic nights, and such. As the process goes on he and I start to hone in on a structure for the ideas we’re going to work out in the piece and he’ll move away from free-form improvs to more structured improvs. Eventually I commit a structure to paper and he starts working within an even tighter frame that can move forward like a story. It’s all improvised though, right up until we start having to tech the piece and into previews. None of it is ever written down until he’s been performing it enough that it’s become 100% repeatable. But the monologues stay in performance forever, it seems, so we’re always looking at the script again each time we go back into production. Franklin was fifteen years in performance when we did at Portland Center Stage, and we still took out another three minutes there. 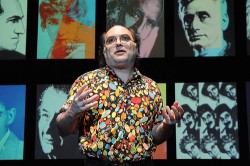 Do you collaborate with Molly Smith when Arena’s new season is being planned and shows selected?

The Artistic Team at Arena does a lot of brainstorming with Molly. And we have the Artistic Strategy as a guide. And the scouting we do as well as the reading of plays. But in the end, Molly’s going to go into her own gut for coming up with the season. Not unlike every other aspect of theater – there’s a period of broad and energetic collaboration, but ultimately each artist has to deliver their own piece of the overall vision.

Had you ever wanted to be onstage?

I trained as an actor and only left that when my son was born (25 years ago!) because I couldn’t do the evening hours. But I’ve not missed it. Not a jot.

What is your favorite production at Arena so far?

I can’t really pick. I have moments. I loved the curtain call at Ruined – it was clear from the response every night that we’d done what we set out to do. I loved everything about Sophisticated Ladies and Next to Normal for the same reason. I loved the performances and direction of A View from the Bridge. I loved the way the audiences were charmed by Oklahoma! each night. I loved the audience reactions every night to Trouble in Mind. Same for Stick Fly. A Delicate Balance was an exquisite show to work on. The big messy things like the Albee Festival and the #Newplay Festival have been amazing. I loved Daniel Beaty and Heather Raffo each holding the Kreeger on their own. So there are just a lot of high points in six years!