‘A Quick 5’ With Deb Gottesman

Deb Gottesman is one of the founding forces behind The Theatre Lab School of the Dramatic Arts. This year alone Theatre Lab raised over $60,000 dollars in scholarship money to send kids to its wonderful summer programs. It’s so nice to see when someone has a real passion for what they do. Deb is one of those people.

Before Theatre Lab you were a full-time actress here in DC. What are some of the favorite roles you played?

Actually, for the first 10 years of The Theatre Lab’s existence, I was still working a lot as an actor. It’s only when I became a parent (of my daughter, Lily, in 2000) that I found it difficult to juggle running a non-profit, teaching and directing, starting a family, and walking the boards. I like to be able to spend as many nights a week at home as I can. But I still occasionally jump back into the fray, as I did last year in Keegan’s A Man of No Importance, which was a kick. 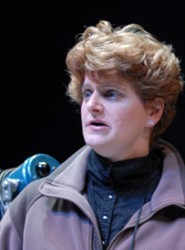 Deb Gottesman in ‘Current Nobody’ at Woolly Mammoth Theatre Company in 2007.

My favorite roles are probably the ones I did at Woolly Mammoth under Howard Shalwitz’s direction back in the late 90’s.  Two brilliant plays written by Amy Freed (who is now a resident playwright at Arena) – The Psychic Life of Savages and Freedomland – where I had the pleasure of working with phenomenal actors like Nancy Robinette, Kim Schraf, Michael Russotto, and Naomi Jacobson.

Another favorite – also at Woolly – was David Lindsay-Abaire’s Wonder of the World. In addition to getting to do the kind of rollercoaster-ride insane romp where you are forced to become a really dexterous comedian, I knew I was originating a role (Cass) that was soon going to be played by Sarah Jessica Parker Off-Broadway. Really fun to be on the ground floor of a big time creative process.

I broke into DC’s theatre scene, though, doing gay comedy.  My first professional show was The Well of Horniness late night at the Source. And I would be remiss if I didn’t give a shout out to my old friends who created Consenting Adults Theatre Co and Freedom Stage (definitely showing my age with these references!).

What gave you the idea to start Theatre Lab?

Well, honestly, The Theatre Lab has evolved into something much greater than I and my co-founder, Buzz Mauro, ever imagined when we were dreaming it up in graduate school. We both got our MFA’s in acting from Catholic U and just as we were about to graduate, we thought we would hang out a shingle and offer to coach people preparing for college and grad school auditions. (Our original slogan was “A foot in the door that won’t cost you an arm and a leg!”) But pretty quickly people started asking if we taught group classes, and the rest is kind of history.  The classes took off, we were really fortunate to be able to engage some amazing artists to teach with us, and we now have more than 1,500 students a year – from people who have never set foot inside a theatre to people who are training to make their living on professional stages.

What is the Theatre Lab’s mission?

The Theatre Lab’s mission is to transform lives through theatre education.  It sounds really lofty, but in practice it’s not. All of the artists who teach with us have experienced first-hand the joy that comes from expanding your sense of self, which is what acting really allows us to do. And to appreciate the myriad ways we connect to the lives of other people.

One of the first things we noticed teaching acting classes here in DC is that the real life benefits of acting training – the ability to speak confidently in front of others, to connect and engage creatively with others, and to believe in the value of your story – are sometimes even more compelling than the artistic ones. And it seemed a shame that these benefits were only reaching the people who had the means to seek them out.

So, along with our third partner at The Theatre Lab, Michael Rodgers (who retired after fifteen years), we created a program called ‘Life Stories’ where Theatre Lab faculty members work with people from typically marginalized populations -people who don’t usually have a voice in our society – and teach them to create original works of dramatic art from their real-life experience. This program has allowed us to work with seniors in assisted living facilities, incarcerated youth, and homeless women in substance abuse recovery. We’re constantly amazed by the beauty and power of the work our ‘Life Stories’ students are creating. It’s a great reminder that the arts are for everyone – not just the select few. That’s also why we do so much scholarship programming. This past year we were able to give out more than $65,000 in scholarship awards so that economically disadvantaged children and teens could participate in our summer acting and musical theatre camps. We are very, very lucky to have a community of supporters behind us who make all of this possible.

Can you name a few of your students that have gone on to have  successful performing careers after attending Theatre Lab?

One of our first students to hit the big time was Andy Brownstein, winner of the 2007 Helen Hayes Award for Outstanding Supporting Actor in a Resident Musical for his role in Signature Theatre’s Assassins. We are proud to have been part of Andy’s journey. One of his very first musical theatre opportunities came when he took The Theatre Lab’s Creating a Musical Role class culminating in a production of Ragtime back in 2004. Recently a number of students from our Honors Acting Conservatory – a year-long professional training program which we began in 2006 – have gone on to some really exciting projects. Jair Kamperveen, from our inaugural class, performed with Classical Theatre of Harlem; Amal Saade (Class of 2007) has been at Theater J and recently appeared in Taffety Punk’s Much Ado (she is also our excellent Program Manager at Theatre Lab!). Rob Weinzimer from the Class of 2008 just came back from Ireland where he was performing in Keegan Theatre’s The Crucible. Tina Ghandchilar from Class of 2009 has also worked with Keegan (in Spelling Bee) and with Forum Theatre in Scorched; and Karin Rosnizeck from the Class of 2010 just finished her run in with No Rules’ Stop Kiss and The Gnadiges Fraulein with WSC. And those are just a few. We’ve had students who have started their own theatre companies which have been incredibly well received in the Fringe Festival; students who have become teaching artists; and students who have been everywhere from Arena Stage to American Century to the Renaissance Festival. We love it that our students are working – and working hard – in the Washington theatre community.

Deb Gottesman and Buzz Mauro and the cast of ‘A Man of No Importance’ at The Keegan Theatre. Photo by James Coates.

What do you consider to be your greatest accomplishment so far?

To have been a part of creating a community where people feel safe taking artistic risks, where the emphasis is on learning and growing rather than being perfect or ‘marketable’ or any of the things that can get in the way of accessing all of who we are as artists, and where everyone – no matter what their beginning point – is pushed to discover the next step in the creative process. Twenty years into this Theatre Lab journey, and it never gets old.
__
Watch a promotional video of The Theatre Lab School of the Dramatic Arts’ programming made by students from Georgetown University.

Watch Deb Gottesman perform “Tchaikowsky and Other Russians” – with lyrics by Ira Gershwin and music by Kurt Weill  – at Theatre Lab’s Cabaret Benefit in 2009.

Here is information about this year’s Cabaret Benefit Dinner and Auction on November 7, 2011, from 5:30-10 PM.