‘A Quick 5’ With Eleasha Gamble

Eleasha Gamble is one of the most electrifying performers working today. She has just finished a triumphant run of Oklahoma! at Arena Stage. Other credits include Joseph and The Amazing Technicolor Dreamcoat at Olney Theatre Company and Oliver! at Lyric Theatre of Oklahoma. Eleasha is pure joy when she’s on the stage. She always looks looks like she is having a great time. I know the audience is having a great time too listening to her gorgeous voice. 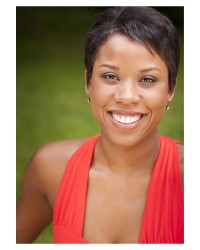 Did you grow up knowing that you wanted to become a performer?

Not really. For the longest time I wanted to be a marine biologists. But singing and being on stage has always been a constant in my life, so I think it was just a matter of time before I figured it out.

My first professional job was playing The Narrator in Joseph… at Olney Theatre. I was a freshman in college, and I had never auditioned for a professional theatre in my life. My voice teacher, Jane Pesci-Townsend, told me about the audition and said I should go in. I showed up without an appointment and got the job!

Do you prepare the same way for every show or is your process catered to each production?

After just finishing Laurey in Oklahoma!, is there another role you would like be non-traditionally cast in? 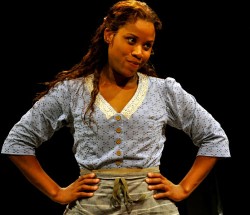 I would love to play Evita, but because she’s an actual historical figure I doubt that will ever happen. Other than that, I don’t have any other role that I’m dying to play. I would just like to be seen as an actress not just an African-American actress. I would like to be considered for a role because of my talent, as opposed to if my skin color is right or not. Unfortunately, very few people are able to see outside of the norm.

Of all the shows you have performed in thus far which ones would you consider to be your favorites?

That’s difficult as I have so many! Oklahoma! certainly tops the list. Other favorites include Ragtime at Toby’s, Chess and Urinetown at Signature, The Civil War at Ford’s, (She received a Helen Hayes Award for her performance) and Oliver! at The Lyric Theatre in Oklahoma City.
__
Watch and listen to Eleasha singing ‘”Many a New Day” from Oklahoma!

Watch and listen to Eleasha Gamble perform “New York, New York” with Jon Kalbfleish on the piano in a sneak preview for the world-premiere theatrical event First You Dream: The Music of Kander & Ebb at Signature Theatre in 2009.