‘A Quick 5’ With Holly Twyford

Holly Twyford is one of DC’s most versatile performers. You have seen her on stage playing a wide range of characters including Bella in Theater J’s Lost In Yonkers, Sissie in Ford’s Theatre’s The Carpetbagger’s Children, Anna in Old Times at Shakespeare Theatre Company, and a piglet in If You Give a Pig a Pancake at Adventure Theatre. She recently made her directorial debut at No Rules Theatre Company with Stop Kiss. 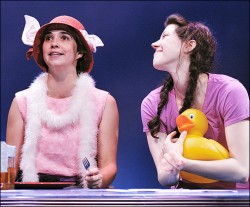 Holly Twyford, left as Felicia - a piglet - and Branda Locke as Laura in Adventure Theatre's 'If You Give a Pig a Pancake. 'Photo by Bruce Douglas.

A cashier at Peoples’ Drug (CVS) …. Oh, you mean in the theatre …. I was the wig mistress for a production of Pygmalion at Arena Stage … the cast included Richard Bauer, Tammy Grimes, Tana Hicken and Jennifer Mendenhall.

You recently played opposite Nancy Robinette and Kimberly Schraf in The Carpetbagger’s Children at Ford’s Theatre. What is it like to be on stage with 2 granddames of the DC area theatre community? 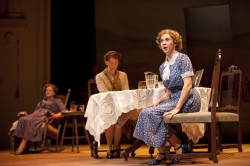 An honor and incredibly fun. It was, however, rather frustrating … the reason we all wanted to do it was that we three had never done a show together although we are all friends … but it turned out that we hardly interacted with each other on the stage! So great and such a privilege to be onstage with them, though, and be able to watch them work.

After making your directorial debut with Stop Kiss at No Rules Theatre Company, a show you had performed in before, would you ever direct yourself in a production?

No. My hat is off to the actor who can successfully direct him or herself.  In film, one could go back and look at the takes and make adjustments, but a stage actor can’t see what he or she is doing, nor can he or she look at the whole picture from within a scene. I had that suspicion before, but it was crystal clear working on Stop Kiss.

No idea. Not sure what could equal the magic that was my Stop Kiss experience …. But we’ll see …it would have to be something that spoke to me as loudly as Stop Kiss did.

You have played Shakespeare, Simon and Pinter – which is a pretty wide range. Who is your favorite playwright? 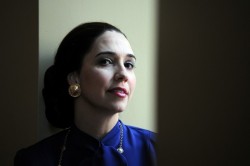 That is an impossible question. The easier question is who are my least favorites …. But I won’t answer that. The three you mention are all so different, with such different qualities and such different strengths.  Pinter’s mystery is as exciting as Shakespeare’s poetry and Simon’s humor can beautifully disguise tragedy as deep as Juliet might feel. I’m interested in a great, truthful storyteller. Wow, I have been very lucky to have spoken ALL those words …