‘A Quick 5’ With James Flanagan

James Flanagan has appeared in Photograph 51 and starred in The Moscows of Nantucket, both at Theater J. He most recently completed a run of The Cherry Orchard at Quotidian Theatre Company. As you will see – sometimes people start off in a completely different field and then decide to become an actor. Luckily for the DC area – James is one of those people. 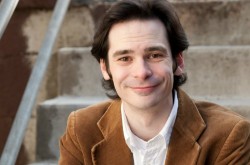 What was your first professional acting job in the DC area?

Arcadia at Rep Stage, directed by Kasi Campbell. I played Gus the mute and Augustus the not-so-mute. I’d have never found my way into the community without the help of Kasi, Kathleen Akerley, Scott Graham, Gregg Henry, Che Wernsman… more people than I have space to properly name and thank.

Not at all. I wanted to be a hockey player. Actually, I wanted to be D.B. Sweeney’s character from the film The Cutting Edge. So I took up figure skating and hockey.   Then the other hockey players began to grow very large. And there was this very attractive girl in all the musicals… 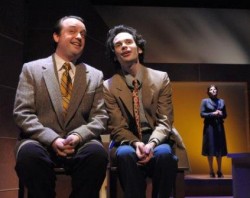 Do you prefer playing drama or comedy?

I’m happiest when finding comedy within drama, both as a performer and an audience member.

Is there a role you are just dying to get your hands on?

No specific character comes to mind. I’d like to play a father. 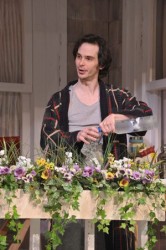 James Flanagan as Benjie Moscow in 'The Moscows of Nantucket' at Theater J. Photo by Stan Barouh.

What do you like to do for relaxation when you are not performing?

I read fiction. Exercise (though not as much as I should). My favorite pastime is eating at restaurants. I’ve waited a lot of tables and tended a lot of bar.  Few things make me happier than a great meal with good company. Oh, and I’m a huge video game nerd. Lucky for me, there’s a strong support group for that within the community.