‘A Quick 5’ With James Gardiner and Erin Driscoll

Here is a couple who are both doing what they love. Erin Driscoll and James Gardiner have performed in many productions at Signature Theatre, and have appeared in shows at Ford’s Theatre and Olney Theatre Center.

James possesses a ringing tenor while Erin has a sweet and lovely soprano. You can currently see James in The Hollow and The Boy Detective Fails at Signature and Erin is currently performing in Parade at Ford’s. They look so cute together.

What were your first professional jobs?

James: The first professional job I ever had was when I was six years old. I was in Washington Opera’s production of The Cunning Little Vixen and I played the role of the youngest fox cub (a pivotal role, in my humble opinion.) My first show out of college was The Studio Theatre’s production of Dog Sees God. 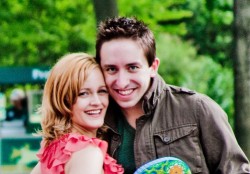 Erin: My first job was doing summer stock at Mount Washington Valley Theatre Company (which consequently doesn’t fit on a resume) in Mount Washington, New Hampshire. I was a junior in college and performed in their productions of My Fair Lady, Grease, and Peter Pan. Once I graduated – I spent a year touring the country with Theatre IV in their productions of Huck and Tom on the Mighty Mississippi and Puss N’ Boots.

Erin: And then I spent a year in Buddy Baxter’s Bandstand USA at the one and only Dollywood. 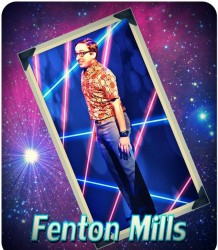 James in 'The Boy Detective Fails.' Photo by Scott Suchman.

What was the first production you performed in together?

James: The first show we did together was The Witches of Eastwick at Signature Theatre, where we actually played opposite each other.

Erin: We sang a love song every night in front of a giant moon. You know, the way normal couples meet.

James: We started dating during the run of the show, although we tried to keep that secret from the rest of the cast.

Is it hard being married to someone who is in the same field as you?

James: No, it’s nice to have someone who understands what I do and why I love it. The only hard part is when our schedules don’t line up and we don’t get to see each other as often as we’d like, but I’m sure that can be true of any profession.

Erin: Plus, James likes to give me notes on my performances. Pages and pages of notes!

James: It’s true. She needs a lot of work.

What are some of your favorite productions that you have performed in together or apart?

James: The Rep at Signature Theatre (The Boy Detective Fails and The Hollow) has been an amazing experience. The opportunity to work on two new musicals by some really talented young writers has been extremely fulfilling. In fact, most of my favorite productions that I’ve been a part of were at Signature Theatre. I’d definitely put [title of show] and Les Miserables at the top of my list. As a writer, Glory Days has been an experience that has been untouched. I wouldn’t trade that experience for the world. 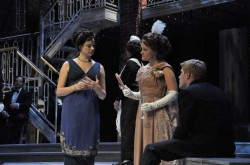 Erin: Urinetown at Signature Theatre, Cinderella at Olney Theatre Center, and Assassins at Signature. Also, Kiss of the Spider Woman at Signature was a lot of fun, and I got to do that with James (although I never got to see him because he spent the whole show in a cage). I’ve been very lucky to do a lot of great shows.

You both do a lot of work at Signature which is known for it’s premieres of new works. How rewarding is it for you to be able to bring something new to the audience?

James: Doing new work is the most rewarding work there is – and I feel very lucky to work at a theatre that is daring enough to take the risk of presenting new shows by unknown writers. Being a young playwright or composer is not easy, especially in this economy where it’s easier for theaters to produce a retread of the most recent hit in New York, or a surefire revival of a classic musical. I think it’s imperative for regional theaters to support young writers, and I think you’d be hard pressed to find an Artistic Director who is more supportive of young writers then Eric Schaeffer.

Erin: Ditto.
__
Watch Erin and James and their fellow cast members in explain to become a member of the “9 People’s Favorite Thing Club.” Watch the video all the way to the end for a surprise guest.