Jen Bevan is a double threat. She is a fine actress – having performed in Socrates the Lover at Capital Fringe 2011, and she is now appearing through Oct 30th in Our Town for Chesapeake Shakespeare Company. 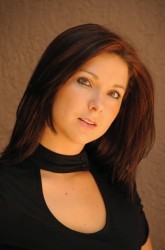 Jen is also a costumer and Makeup Artist. She made her NYC makeup debut with The Negro Ensemble Company last fall with Aaron’s Arms Around Me and The Mire. Other design credits include productions for Synetic Family Theater and Maples Repertory Theatre.

What was your first foray into the theatre?

Personally or professionally?  Personally, I would cast, direct, and star in various versions of Annie at the age of 5 in my backyard. I was raised on musicals. Professionally, my first gig was right after I graduated college. I was a stitcher for a theater in Missouri (Maples Repertory Theatre) for their summer season. I spent, on average, 12 hours a day sewing and then went back to our housing which was a huge, run-down, turn-of-the-century mansion that was rumored to be haunted. It was there that I knew I had made the right choice for my life. I was surrounded by people who ‘got me,’ doing what I loved, and seeing the country one ghost-infested house at a time.

How did you get into costuming?

Costuming developed pretty organically for me over the years. In high school and college I just wanted to be involved with the shows in some capacity. If I didn’t get cast that semester I would sign up for costume crew. It was an automatic and natural reaction for me. I couldn’t imagine one minute away from the theatre. So after a few shows in the costume shop in college – our costume design professor peered over my shoulder as I was sketching in my notebook and suggested that, after I was done with my basic tech classes, I take her costume course. I did, and before I knew it I was in the costume shop all the time learning new techniques and tricks. The Costume Studio Manager quickly became my best friend and my biggest support. He was an actor in the DC area until he moved to Florida and he taught me that I could, in fact, costume design while keeping my acting dream alive.

What are your favorite kinds of roles?

I was actually just thinking about this because I was creating a list of characters for my Principles of Realism class that I am enrolled in at Studio. I noticed a theme: I like to play characters that are deeply disturbed in one way or another. I love to really dissect characters, to sit down and read the script over and over again, to find new levels of their psyche and facets of their personality. I find similarities with them, however big or small, and becoming them is very cathartic. I find the more psychotic a character is – the more grounded I feel as an actor and as a person while I play them. In those weeks of rehearsals and through the run – there is no room for hatred, anger, or envy in my life because I leave it on the stage.

Jen Bevan in 'Socrates the Lover'.

Which is more satisfying to you as an artist? Being onstage or behind the scenes?

This is one of the hardest questions that I am constantly asked and I have yet to fully develop my answer. Being onstage I get to release. I get to jump out of my body, my world, and hop into someone else’s, and that can be immensely satisfying. Of course, the immediate gratification of an audiences applause is an undeniable satisfaction that a designer never really gets to feel. But there are moments as a designer that are immeasurably satisfying as well. When you present your design vision – and not only does the director get it and support it – but it helps mold his view of the play. Or when an actor comes to his first fitting and says as he walks around, “Oh there he is. Now I totally get him!” The impact of a well thought out design can be limitless with the right director and actors.

When I choose acting over designing (or vice-versa), I always yearn to do the other.  I feel as though this will be a constant, circular, struggle for me, but so far I have been able to manage just fine.  I have even been privileged enough to be in productions I have designed and I have received costume jobs from shows I am in. It’s a delicate balance and the scale is always tilted one way or the other – but I could never pick one or the other for an extended period of time.

Ooo time for shameless plugs! Currently, I am playing The Lady in the Box in Our Town with the Chesapeake Shakespeare Company until the end of October. I am also the Wardrobe Mistress doing laundry and sewing the occasional snap or button. Then I will be working with the Ambassador Theatre on their production of The Madman and the Nun. Initially, I was brought in as the Costume Designer, but after meeting me – the Director decided to cast me as an attendant as well.
__
Check our some of Jen Bevan’s costume designs.