‘A Quick 5’ With John Miller

John Miller is a Broadway Orchestra Contractor. An Orchestra Contractor is the person who hires the musicians for the show. This is no small task. There are lots of variables the contractor has to deal with. As you will see – John loves what he does. Why shouldn’t he, his contracting credits include Jersey Boys, Rock of Ages, The Secret Garden, Tommy, The Story of My Life, Parade, and so many more. His CD called Stage Door Johnny is available on PS Classics. 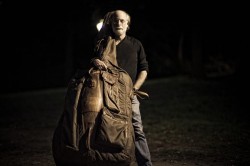 Why did you choose the bass as your instrument?

When I was a young kid I played guitar. Really didn’t know what I was doing as I was self -taught, but it sounded pretty good. A number of years later, when I was about 13, I remember walking down 48th Street and seeing a guy wheel a string bass down the street. I was mesmerized and followed him for blocks. At 16, a friend of my brother’s left a bass at our house during his college Christmas break. Two weeks later I told my parents I wanted to study the bass. Still love playing it (both the acoustic and electric).

Believe it or not, it was Carnegie Hall playing with a folk singer named Barbara Dane. I was 17

You were Music Director for I Love My Wife on Broadway as well as one of the characters in the show. If you were offered that job now would you take it?

How do you choose the musicians for a particular show?

Very, very carefully. What musician resonates with the style of music?

What do the composer and orchestrator hear as the perfect approach for each instrument?  I try to match that with the player. What complement of players will bring out something special in this particular music? And most important, who are players that the Conductor, Orchestrator and Composer all feel are most appropriate to that specific score?

What are some of your favorite musicals that you have contracted?

As a jazz player, City of Angels was a thrill. As a rock player – hard to beat Tommy. The South African grooves in a little known show called Kat and the Kings have stayed with me.

I love the entire process of putting together these musicals. Of the over 100 shows I’ve been involved with, they’ve all allowed me to work with some of the greatest composers, orchestrators, and musicians. And not only in New York, but throughout the country.

John Miller’s website, where you can hear musical clips of his CD Stage Door Johnny.