‘A Quick 5’ With Luke Tudball

Luke Tudball has just completed a successful run of Pop! at The Studio Theatre. What is even more interesting about Luke is when he is not on stage – he is an accomplished carpenter for some of DC’s best theatres. He has built sets for The Studio Theatre, Signature Theatre, and currently Constellation Theatre. I always tell actors to learn the tech side of things – because there are always calls out for tech help on a show. Nice to see someone listened to this logic. 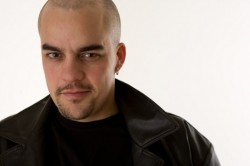 I actually didn’t get started in the professional theatre world until I had been acting for a while. I had done a lot of community theatre and Fringe shows in London and around the UK previously. My first professional job was kind of crazy – a two-hander tour of north America doing The Lion, The Witch and The Wardobe and A Christmas Carol in repertory. It was me and one other actor doing the acting, the tech, and the driving around! It was exhausting, but exhilarating all at the same time.

How did you get into theatrical carpentry?

I’d always been interested in the technical side of theatre and while I was training I needed (as many actors do) a secondary source of income. I was lucky enough to be able to work with a number of different companies in different areas of tech, but found that I enjoyed carpentry the most. When I came to the US, I was happy that I was able to continue working as a carpenter on a number of projects in New York, as well as other places.

Which gives you more pleasure, carpentry or performing?

My first love will always be performing – I don’t think anything can beat the adrenaline rush of a live audience. Knowing that you only have that one chance to bring everything you have learned and rehearsed to the fore – is a unique experience. I actually have been lucky enough to work on a number of shows as an actor that I have also worked on as a carpenter, and that adds a certain sense of satisfaction 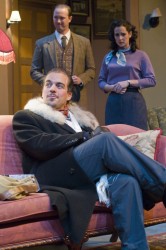 Luke Tudball, foreground, as Mr. Paravicini, in 1st Stage’s production of Agatha Christie’s “The Mousetrap”. In background, John Stange and Jennifer Weinreich as Giles and Mollie Ralston, proprietors of the guest house.

What is your favorite role as a performer so far? Which sets that you have constructed are you most proud of?

I’ve been very fortunate to have been able to work on some great productions, but I think my favorite role to date has to be Old Tom in the period drama The Lost Colony. The show tells the story of the English settlers coming to North Carolina and trying to form the first settlement in the 1880s, and is the longest-running outdoor drama in the US. Old Tom starts off the story as an alcoholic down and out, but finishes the story playing an integral role in the survival of the colony. It’s a fantastic journey.

As far as the sets go – I am proud of all the work I’ve done, but I think one set that stands out is one I actually worked on at college. The play was set in Siberia, in the steppes, and told the story of some archaeologists discovering one of the oldest preserved humans. The set was completely turfed to look like the green fields of the steppes and featured a broken down World War II West German jeep, as well as a live campfire and pit (with real earth that could be excavated). We had to water the turf every day to keep it fresh!

What are your upcoming projects?

Right now I am working on a set for Constellation Theatre for their production of Arms and the Man at Source Theatre. After that I have a couple of projects which are still in discussion, but needless to say, I am always on the look out! I’m the kind of guy that thrives on being busy and I’m always learning.

Watch a video compilation of some of Luke’s film and television work.