‘A Quick 5’ With Matt Conner

Matt Conner is a very talented composer, performer and musician. His musical The Hollow co-written with Hunter Foster is currently running through Oct 16th at Signature Theatre. As a performer, he has been seen at Signature in many productions including Showboat and Sunset Boulevard, as well as other area theaters. You might also have heard his piano talents pre-show in the Signature lobby. Matt is a very personable ego-free guy – something every performer should aspire to be.

How did you become involved in the DC/VA Theatre scene?

I became involved in the DC/VA Theatre Scene in October 1997 when I began rehearsals for A Christmas Carolat the West End Dinner Theatre in Alexandria, VA.  The show was directed by Nick Olcott and I played the part of a ‘dancing demon.’ 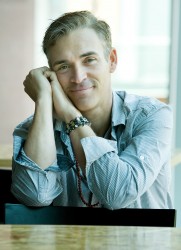 Which do you prefer more, performing or writing?

Writing is more rewarding to me.

What was it like to work with the legendary Orchestrator Jonathan Tunick on Nevermore?

Working with Jonathan was a blessing. He had just finished working on The Color Purple on Broadway and it was such a delightful experience. He ‘got’ the show from the very start and wanted to create a gothic chamber mood orchestra. and I remember once in rehearsals Jonathan looking at me and saying, “What do you think Matt?” And I without a hesitation replied, “I think what you think.”

What future projects do you have in the works?

Crossing inspired by the Underground Railroad will have it’s DC premiere next year. I am writing Eddie Allan Poe (a children’s musical to premiere this fall in Falls Church at Creative Cauldron at ArtSpace), Kaleidoscope, a musical dealing with a woman  who is suffering from Alzheimer’s, Night of The Living Dead, based on the 1968 film which will premiere in NYC and DC next year, and Senior Moments, which is a Golden Girls meets Glee.

What do you consider to be your greatest accomplishment of your career thus far?

If I have moved someone or touched a soul, that is the greatest accomplishment I could hope for. Eartha Kitt once said to me, “If you ever feel like you haven’t made a difference, remember you already have.”