‘A Quick 5’ With Natascia Diaz

Natascia Diaz is currently performing in Savage in Limbo at MetroStage. Her past DC credits include Kiss of The Spider Woman at Signature Theatre, Glimpses of The Moon at MetroStage,and Barrio Grrrl at The Kennedy Center. In NYC, she has appeared in Paul Simon’s The Capeman, Man of La Mancha with Brian Stokes Mitchell, and Seussical. She recently completed a very successful run of A Chorus Line at Lyric Theatre of Oklahoma.

After working in NYC for a number of years, what do you think about working in the DC area?

Well, the one thing about the way things work in DC that I found most shocking in contrast to NY is the lovely, polite invitations you get to audition! “Would you be interested in coming in for our production of….” What? My God, how utterly civilized and polite! It is refreshing. But beneath it all, I am NY bred and shaped. It is the most competitive city in the world and the work ethic it takes to stay in shape and on your A game is a big part of what keeps work coming. 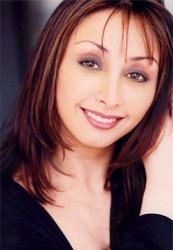 In June, I had two Off-Broadway shows back to back, understudying in Lynn Nottage’s new play By the Way, Meet Vera Stark  (which now may go to Broadway!) and I was called to go into The Best is Yet to Come, a Cy Coleman review for 6 shows. I learned the play (both Stephanie Block’s role and Karen Olivo’s role) in less than two weeks, then I learned the Coleman show in 4 days. You just have to be ready for anything. But I am newly signed with a fabulous agency in NY so, I am looking forward to what’s next – in both cities.

Do you think The Capeman will ever resurface in a full production?

I really hope so. Playing Esmeralda was a transcendent moment for me. No one writes a song like Paul Simon. And to be entrusted to deliver his musical message is a waking dream. We all knew what Paul is trying to do with this piece and it was just mismanaged the first time around. But being in that room with Diane Paulus – 0ur production at the Public could not have been guided with a surer more poetic hand. I hope it gets another chance. It deserves it. 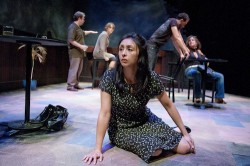 You are currently performing in Savage in Limbo at MetroStage. Do you prepare differently for that kind of a show than you would for let’s say Pippin?

Of course. Savage really intimidates me. It takes a lot of concentration to create the inner turmoil to support those wildly searching existential arias. It’s an inward energy, though. It’s not like when I’m about to do “America” in West Side Story. It’s a concentrated focused emotional energy.

What would be your dream role? I would love to play Sally Bowles. I would love to do classical theatre. I’m really open to anything. I think theatre is important and I just would like to be useful to it’s cause.

What is next up for you after Savage?

I am going to do a Cabaret at Signature called Music in the Movies. Then I’m really looking forward to (at long last) making my debut at Shakespeare Theatre Company  in The Boys From Syracuse. Then, I hope to get myself speedily to the Florida Keys or the like for a much needed vacation.

Watch Natascia play Cassie and dance “The Music and the Mirror” on opening night of A Chorus Line  at Lyric Theatre of Oklahoma.

Watch and listen to Natascia sing “Marieke” and “The Old Folks” from Jacques Brel Returns -The Music of Brel, Blau, Shuman, & Jouannest at The Triad.