‘A Quick 5’ With Noah Chiet

Noah Chiet is 13 years old. He’s in the 8th grade at A. Mario Loiederman Performing Arts School in Montgomery County. His stage credits include Liberty Smith and returns to Ford’s Theatre in A Christmas Carol. Noah just concluded his run in The Hollow at Signature Theatre. In the spring, Noah will be in the premiere of The History of Invulnerability at Theater J.

Did your parents encourage you to become a performer?

Well, let’s just start out by saying that I couldn’t have done any of this without my unbelievably supportive and loving parents. I am being honest. It’s not often you hear those words out of a “teenager’s” mouth. I am so fortunate to have parents who have always encouraged me to follow my dreams. 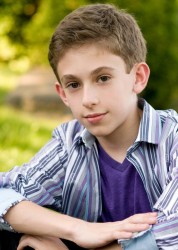 What was your first role ever on stage?

My first role ever on stage was in a production of The Wizard of Oz. I played a couple roles, a munchkin, a Citizen of Oz, and Nikko, the Leader of the Flying Monkeys! I remember at the audition, they asked if I had any special skills. I told them that I had my black belt in Karate, and they actually had me do some moves on stage in the show! Haha!

Has Musical Theater Center helped you to become a better performer?

MTC is my roots. I attended my first class there when I was 7 years old. We did song selections from Little Shop of Horrors. Imagine that! I feel MTC gave me a solid foundation, and the skills I needed to move forward. I also performed in their ensemble “Upbeat Unlimited”, which coincidentally James and Matthew Gardiner performed in when they were my age! Lisa Carrier, one of the teachers at MTC, recommended me to audition for Falsettos at Ganymede Arts, which was my first professional show. This show was definitely a turning point in my life. 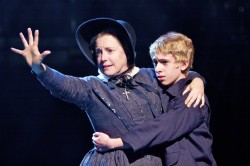 Besides theatre, what are your other interests?

Well, like every other 13 ½ year old, I love to hang out with my friends, (when I have time!) watch movies, go on facebook, draw, procrastinate doing homework. Spend time with my family. You know, the usual. I enjoy going to see other productions in DC, and supporting my theatre friends. 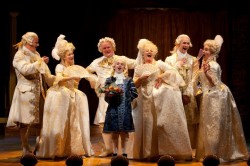 You performed in the premieres of Liberty Smith and The Hollow. How does it feel knowing you were premiering a brand new musical?

I am so honored to have been a part of these two shows. I have gotten to work with some of DC’s finest. Premiering a brand new show isn’t easy. You have several times the amount of pressure, on not just the actors, and creative team, but everyone involved. Throughout the whole process, there are constantly cuts, additions, and changes. For example, in The Hollow, we added a whole entire scene on the final preview before opening night! It’s pretty crazy! But in the end, you feel so rewarded. It’s cool to know that you ‘originated’ the character you played, and that you made a little bit of history. 🙂