‘A Quick 5’ With Paata Tsikurishvili

Paata Tsikurishvili is the Artistic Director of Synetic Theater, which is the only ‘Physical Theatre’ company in the country. Paata is a very driven and emotional man – and as you will see – a very intense and passionate one too. I’ve lost count of how many Helen Hayes Awards this genius has received.

What gave you the idea to bring a physical theater company to the DC area?

When I was behind the Iron Curtain in the USSR – I was dreaming about escaping to the US and opening a theater company – and to make a long story short , and lucky me – I just landed in DC from Germany where I was working in Mimodrama Theater. I was visiting Irina and my son Vato. I found DC a very attractive city – I loved it. Then I found that there was no Physical Theater in the DC area – so that was a great window of opportunity which we didn’t miss, thank God. Still there is no Physical Theater around the country – not only just DC – so we still have a vision don’t we? 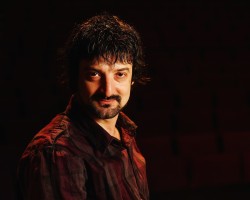 How long does it take for you to bring a Synetic show from the idea to full production?

It use to take 3-4 months of rehearsals and 2-3 months for me to develop the idea, concept and the script, but since I have produced and directed and Irina has choreographed about 50 plays and productions, I have developed a great core of actors, and an artistic and production team, who can now take only  5 to 7 weeks to put up a show.

Is it hard being married to your collaborator?

It is not simple or easy. We have a saying, “There is nothing easy at Synetic,” and that’s what makes us successful. But look – we no longer are married to each other; we both are married to the Theater 🙂

Your rehearsal schedule is quite intense, what do you do to unwind on your days off?

Days off? what does that mean? Really – we don’t and can’t have days off. Officially I have Mondays off, but if I’m not doing theater related things – I have anxiety, and I feel I’m doing something wrong or feel guilty not doing anything. Synetic occupies my mind and dominates and even controls me, so I think we are possessed by Synetic. 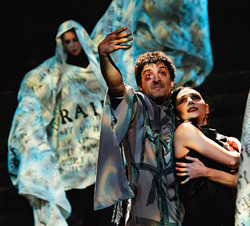 Of all the productions Synetic has presented so far – what are your favorites?

It is really difficult for me to say which one is my favorite play but I can name a few of the most successful ones: King Lear, Othello, Hamlet …the rest is silence, Dracula, Frankenstein, Antony and Cleopatra, Romeo and Juliet, Master and Margarita, Carmen, A Midsummer Night’s Dream, and Faust. I should stop here or I’ll list them all!
__
Watch Paata and Irina Tsikurishvili in a video preview of Synetic Theater’s 2010 production of Master and Margarita.