‘A Quick 5’ With Sasha Olinick

Sasha Olinick’s performing credits include Amadeus at Round House Theatre, The Wind in the Willows at Imagination Stage, The War of the Worlds at Scena Theatre. and The Russian National Postal Service at The Studio Theatre. When not performing, Sasha can be found teaching at Montgomery College in Rockville, MD, and the Educational Theatre Company in Arlington, VA. 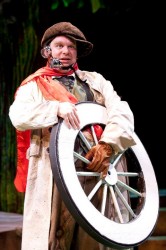 Sasha as Mr. Tod in 'The Wind in the Willows.'

When I was 19, I was paid to do an impersonation of Francis Parkman, a 19th Century American historian, and recite a monologue from his diaries at the dedication of a new research center at Fort Ticonderoga in Ticonderoga, New York. My second professional job came a year later playing the Sgt. of Police in The Pirates of Penzance with the Ocean State Light Opera Company, in Providence, RI.

Wow. That’s a hard question to answer. Mostly I worry about the fact that I’m not preparing enough, and then place enormous faith in the playwright, the director, and my fellow actors.

Were you teaching before you started performing or was it the other way around? 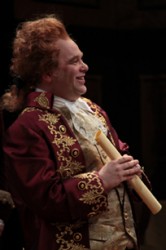 Sasha as Wolfgang Amadeus Mozart in 'Amadeus' at Round House Theatre. Photo by Danisha Crosby.

I think I’ve always done both. I performed in junior high and high school, and then when I was 18, I co-directed a theater summer camp for 4-12 years olds. So technically speaking, I was paid to teach before I was paid to act, but teaching and acting have always felt like inseparable parts of my career.

What are some of your favorite roles?

To date, my eight favorite roles, in the order I played them would be: -drum role please!-: The Third Man in Baltimore Waltz by Paula Vogel, the Robin Oakapple in Ruddigore by Gilbert & Sullivan, Lord Goring in An Ideal Husband, by Oscar Wilde, Man in The Fever by Wallace Shawn, Caliban in The Tempest, by William Shakespeare, Mr. Toad in Wind in the Willow, Will in The Book Club Play by Karen Zacarias, and Mozart in Amadeus by Peter Schaefer. 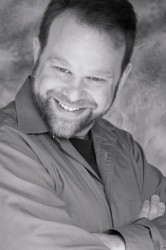 I’m currently teaching two acting classes at Montgomery College and I’ve just begun a two-year term serving on the Board of Trustees for Round House Theatre. I plan to be facilitating an absurdist play, probably Cause For Alarm by Jen Schwartz, performed by self-directed students at the National Conservatory for Dramatic Arts later this semester. In the spring, I’ll be playing the king and the prince’s valet in a musical version of Rapunzel at Imagination Stage, and then in the summer – my big hope is to run a four-week intensive acting conservatory for teens and young adults – through the Educational Theatre Company in Arlington, VA.

Watch Sasha as Toad in a sneak peak video of The Wind in the Willows.