‘A Quick 5’ With Tina Ghandchilar

Tina Ghandchilar is one of those performers that has what we call the WOW!! factor. She has a knock-out singing voice and is a great dramatic actress as well. Recent performing credits include The Happy Elf for Adventure Theatre and Montgomery College, Scorched at Forum Theatre, and The 25th Annual Putnam County Spelling Bee at The Keegan Theatre. She is a graduate of The Theatre Lab School of the Dramatic Arts, and portrayed the lead in their production of Jane Eyre. By day she is a Speech Pathologist for the Loudin County School District. She made her NYC debut singing at our wedding. Yep – Jen and I introduced NYC to Tina. I think we did NYC a big service! 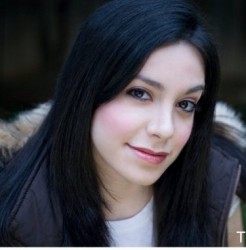 Did you always want to be a performer?

In 2nd grade I remember thinking to myself, “I wanna be an actress/pediatrician.” And yes, there was a slash mark between the two. Well, in college, organic chemistry didn’t work out so much for me so somehow I ended up being a speech-language pathologist working in the school setting….with some performing on the side if I receive the honor and it’s meant to be. I have a tremendous amount of respect for full-time performers. They spotlight amazing, brilliant work, jumping from show to show, and a lot of times they are able to balance out their transitioning from a full run of a show into a rehearsal schedule for the next one, which can be taxing all-around.

By day you are a Speech Pathologist. When you are performing in a show is it hard to balance both things?

Most definitely. It is a major challenge being able to juggle the two with finesse. At times a clinician has so much going on at school…new students on the caseload, (typical caseloads range between 50-60 students)…eligibility testing you need to conduct, parent Individualized Education Program (IEP) conferences you need to hold sometimes before or after school…therapy lessons you need to plan accordingly in your “spare time,” whatever/whenever that may be. And this is just the beginning. Doing a show during IEP season is BRUTAL….so you might as well stock up on your Wheaties since there aren’t enough hours in the day for sleep. For some time now I’ve been hoping to come up with a way of ethically combining the two within another setting somewhere down the road. Fingers crossed.

Do you prefer performing in plays or musicals?

Even though I received a BA in Musical Theatre, at times I’m finding myself more emotionally invested in plays  Although it depends on the musical, as I’m naturally drawn to the more dramatic, and historical musicals, and to specific types of socio-cultural content some musicals have to offer, like Next to Normal and Les Miserables for example. If there is a show that portrays genuine meaning to me, there are no other conflicts in my life/schedule and if I’m lucky enough to have the opportunity of being a part of it, I’ll happily welcome it with open arms. 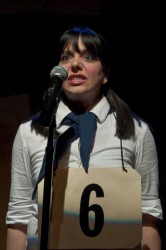 Tina as Marcy Park in 'The 25th Annual Putnam County Spelling Bee' at The Keegan Theatre.

Do you prepare the same way for each show or is the process different every time?

I think the process varies from show to show. Doing some serious dramaturgical work ahead of time, (either before the rehearsal process, or during the beginning process) is ideally what I aim for. I try to have a full in-depth understanding of my character’s background, (social, emotional, culture, physical…the whole nine yards) during the process of preparation. If I don’t have a full scope of who the character is or where she/he is coming from, then it’s difficult to be able to delve into the character emotionally, and that’s when I become completely lost. This is why doing research going into a show is essential. On the whole, I believe in the pertinence of a multi-disciplinary-like team approach in order to bring a great piece to fruition. For musicals, there might be more homework involved. Learning music, and at times having to belt it out while jumping rope, or doing a cartwheel, or even just doing something as simple as a kick ball change can all be slightly daunting as I have three left feet.

What is your dream role?

Oooo…this is a toss up between Catherine in Proof, and Jo March in Little Women. I mean, isn’t it every girl’s dream to be able to belt out “Astonishing”?