‘A Quick 5’ With Zak Sandler

Zak Sandler is a triple threat among musicians. He plays piano with the energy and intensity that Bernstein used to have as a conductor. His orchestration career is blossoming, following the four-piece orchestration he did of Sweeney Todd for Signature Theatre last January. On top of all of that – he is an up-and-coming composer. All that talent and so young too. I am so jealous!! 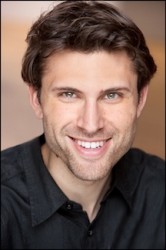 I grew up in a very musical household. My mom would make up jingles and sing them to me with her beautiful soprano voice. My dad would play LPs non-stop – The Beatles, Bill Evans, Ravi Shankar – until, when I started learning classical music, I told him, ‘Shut it off!!!  At age 5, I started piano lessons with one of my heroes, Irena Orlov, and at age 9, I began playing ridiculous parts like Sarastaro and Figaro in the (now defunct) OperaKids program at The Levine School of Music. I would memorize entire vocal scores. I took special pride accompanying myself singing the Queen of the Night aria.

What was your first professional gig?

Technically, it was subbing on Keyboard 2 for The Studio Theatre’s production of Caroline, or Change in 2005 – thanks to Jon Kalbfleisch – where I got to work with one of my musical idols, Howard Breitbart. But I often think of my first real gig as when I music directed and conducted Songs for a New World with the brilliant Suzanne Richard at Open Circle Theatre. I had a lot of responsibility for a 20-year old. Looking back, I’m actually not sure why they thought that was a good idea.

How does one take the Sweeney Todd original orchestration and reduce it to 4 players and still manage to get all of the voicings of the original?

Piano. Large range, broad spectrum of colors.  Percussive and lyrical sounds.  (I was insistent on it being an acoustic grand piano, because I felt that the frequencies coming out of the piano would blend with the other instruments to create a fuller sound than they would coming from an amp.)

Cello and Reeds. Large ranges, unique timbres integral to the show’s sound.  (For example, a string on “Alms, alms…” and an English Horn on the music under “Barber and his wife”).  I felt that with six reeds trading off with cello, there would be enough colors to trick the ear into thinking it was hearing more than what was actually there.

An example I often point to is the end of “Wait,” when the orchestra plays an ascending 5th four times in a row (under “Gillyflowers maybe, ‘stead of daisies”). In the original, it’s four different instruments. I had Bass Clarinet do the first, and then as the Cello played the next two in ascending octaves, the reed player switches to Flute and plays the fourth one. A number of people commented that was the moment they knew there must have been two reed players.

Part three: Three fantastic players: Ben Bokor, Aron Rider, and Lee Hinkle. As the fourth, I valiantly attempted to play my own orchestrations correctly, while rotating to play the Harmonium and bobbing my head.

Do you prefer Composing/Orchestrating over Musical Directing?

I love music directing. Composing and orchestrating have a certain appeal, though, because they’re particularly creative. I also really enjoy conducting, where you have a wall of sound at the command of your fingertips, and can watch and guide the action onstage. It’s like you’re playing every part. Reminds me of the days when I performed The Magic Flute entirely by myself.

The next big one is A Second Chance, which I’ll be conducting and music directing at Signature from Nov 15-Dec 11th. It’s a wonderful new show by Ted Shen, with complex and interesting music, a brilliant orchestration by Bruce Coughlin, outstanding direction by Jonathan Butterell, and stellar performances by Brian and Diane Sutherland. I’m thrilled to be a part of it.

In the meantime, I’m music directing a one-night-only concert performance of Salamander Leviathan, a new musical, at Ars Nova on October 31st, and looking forward to working on Triassic Parq when it opens Off-Broadway this winter.

Finally, I’m working on several writing projects with brilliant lyricist Greg Edwards: an adaptation of Office Space, and an original musical called Split Decision, about a guy facing a tough life choice who splits into two alternate, coexisting realities – so the audience gets to follow both choices. I’m also working on Anthem, a new musical that tells a fictionalized account of how Francis Scott Key came to write the national anthem.