after the quake at Rorschach Theatre

“We tell ourselves stories in order to live.” is Joan Didion’s opening sentence in The White Album and, in the case of the protagonist of after the quake, Frank Galati’s adaptation of several Haruki Murakami stories, this is quite literally so. Following a massive earthquake, writer Junpei (Daniel J. Corey) and his vivid imagination calm Sala (Megan Graves), the daughter of the woman he loves, Sayoko (Jennifer Ayn Knight), while a frog (Dylan Myers) teams with Junpei’s hapless friend Katagiri (Maboud Ebrahimzadeh) to battle a worm to save Tokyo. Still with me? If not, that’s beside the point: when you read Murakami, you suspend the ‘real’ world for one laced with magical realism. 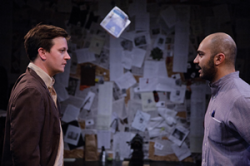 People, and things, disappear in Murakami’s worlds and his protagonist’s physical search for what has been lost mirrors an inward one. Director Randy Baker brings out the humor in Murakami’s grim surrealism wonderfully and honestly. At one point, I was certain that Corey was laughing not in character but as himself at the antics of his co-stars before he transitioned into tearful melancholy. Ebrahimzadeh segues thrillingly from machismo to uncertainty. Myers has a solid croak and a practiced leap. Graves is a surprisingly commanding presence given that she has the least amount of stage time. The looks Knight shoots Corey are loaded —with tender ambiguity. Costume Designer Frank Labovitz has had Myers don a pair of outlandish hipster glasses to match Frog’s outsized persona. The touch neatly underscores the contrast between the scale of Frog’s ambition, to save Tokyo, with his humility (he desperately enlists the help of the most unassuming man in Tokyo in his quest).

Debra Kim Sivigny has wisely let the actors’ well-choreographed physicality transport us in lieu of a garishly overdone stage. The space is so intimate that anything more than the plain, squat table center stage, the detritus of someone’s life – a teddy, tea kettle, LPs, camcorder, badminton racquet, disposable dust masks – suspended from the ceiling and walls plastered with newspapers advertising disaster would be garish overkill.

When the characters narrate reflexively in the third person – it becomes part of their delightful charm, aided by Elisheba Ittoop’s hypnotic Sound Design and Stephanie P. Freed’s lighting. Something of a superhuman himself (Murakami has owned a jazz bar, completed an ultramarathon and translated American classics into Japanese), Murakami knows that even the most ordinary people can accomplish, say, six impossible things before breakfast. 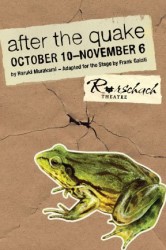 Running time: 1 hour and 30 minutes, without an intermission (which I wish they had).