South Pacific, the Rodgers and Hammerstein WWII musical is in port at Hippodrome Theatre at The France-Merrick Performing Arts Center for one week only!  Maryland native Alex Pepper is happy to be back in his hometown, where he takes pride in being the Assistant Dance Captain and Swing in this National Tour, which is not to be missed! Between working out and rehearsing, I had the pleasure of interviewing Alex. 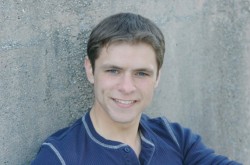 Mark: You are what is called a “swing” in the show. What does a swing do?

Alex: The swing is kind of the insurance policy for the show. There are two types of swings: an onstage and offstage swing. I’m an onstage swing. Depending upon the size of the production there is usually one male and female swing. The swing covers an ensemble member – if he or she is an understudy for one of the leads that has to go onstage for a performance.

Alex: It’s fun and scary to think that at any moment I could be called onstage to perform one of eight different roles! I take a lot of notes while watching to help me prepare. Sometimes you have a few hours to prepare before a performance – but if someone gets hurt during the show – I have to immediately step in!

Mark: So you could say, you have to always be on your toes! Growing up in Maryland, where did you get your training?

Alex: I’ve had lots of hands on training at Way Off Broadway Dinner Theatre in Frederick getting to work with Susan Thorton and Samn Huffer. For dance, I went to the Dee Buchanan Studio of Dance in Middletown. I did voice training in the area with Carol DeSantis and Lenore Odekirk.

Mark: How did you get into theatre?

Alex: It’s kind of weird how I got into theatre. In the first grade I asked my parents how do kids get to act on TV. And they said, “Why don’t you try theatre!” So I started in school shows. In the sixth grade I performed in my first musical as Frederick in the Sound of Music, and just fell in love with theatre!

Mark: What was your first ‘big gig?’

Alex: In the tenth grade through a dance competition I got to tap dance at the 2005 Spring Gala, at the Kennedy Center, hosted by Julie Andrews! I had the pleasure of being in her way backstage! You see, I was in a doorway standing there getting ready to go on and I felt a hand on my back and turned around – and was eye to eye with Julie Andrews. She didn’t say anything but she smiled and I felt so scared as I shot up against the wall to let her get by.

Mark: What role does dance take in telling the story of South Pacific?

Alex: That’s one of the interesting things because in this production they really wanted everything to be very realistic, and to find the meat of the story. We use a lot of pedestrian movement set to music. There is a lot of dance weaved into that – but it is all based on reality which is awesome and so much fun!

Mark: Speaking of dance, you are also the Assistant Dance Captain.  What are your responsibilities?

Alex:It’s my job to help the Dance Captain and choreographer wherever they need it. Like, for one performance I got to sit out and sit with the choreographer and director and help them take notes on formation and anything related to music and dance. I also have to know everybody’s choreography so, if at any point someone is out sick I can help teach the dances to the swing or understudy so they can go onstage knowing the role without hurting themselves or the people around them. It’s been a real learning experience for me! 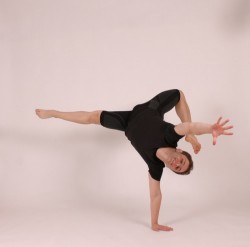 Mark:  Does the cast warm-up before the show?

Mark: What makes being a part of this show so much fun?

Alex:  The cast works so well together both on and offstage, which is great since we all have to live and work together while on the road. The chemistry is awesome! It didn’t feel any different from a community or college production in terms of how rehearsals were run. You had fun and got the work done! Then you had some more fun! So we really got to play a lot during rehearsals and experiment with our roles.  There was always exploring and building. It was an awesome and rewarding rehearsal process!

Watch a Dance Reel of Alex dancing up a storm.