¡Ay, Carmela! opened GALA’s 2011-2012 season and is certainly a play which begs the question, “How dedicated are we – the living – to the haunts and beliefs of our hearts. I asked GALA Founder Hugo Medrano, his thoughts on playwright José Sanchis Sinisterra’s take on the play, why he chose it, and what’s coming up next at GALA.

Zunny:  I enjoyed Ay Carmela! immensely.  I know there is historical significance to the play. What statement is playwright Sinisterra making about the power of conflict to force the envelope on personal choices? 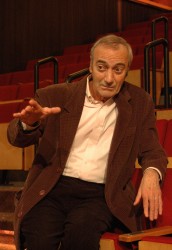 Hugh: The playwright is talking about the fact that often war, conflict, or oppression force individuals to think about or speak out about their beliefs or values. In this play there is a contrast between the free-spirited Carmela, who decides to speak out for freedom, and her companion Paulino, who hides his beliefs in order to survive.  The question the playwright proposes at the end is, “At what expense do people become martyrs for a cause?”

What prompted you to open the season with ¡Ay, Carmela!?

As an Argentine artist I had to leave my country during the time that many of my artist friends were being “disappeared.”  I travelled to Spain and spent my formative years studying and working with leading directors in Madrid.  I have been faced with censorship and threats not only in my own country but actually with a play I produced here in DC early in our history that criticized the military dictatorship that was in power in Argentina in the late 1960s. The Argentine Embassy threatened to pull the lead actress out of the show, and forced me to cut out the director’s note that spoke about the dictatorship. It is a horrible feeling and I am glad that things have changed since then.  I believe, like Carmela, that the duty and role of artists is to defend freedom of thought and speech at all costs. I am just glad that I did not have to become a martyr and that I am able to produce work that helps raise social consciousness about war an oppressive regimes all over the world, and about the need to preserve memory so that we don’t repeat history’s devastating events.

In your 36 years with GALA Hispanic Theatre, what made 2011 the right time to present this award-winning play to a United States audience? 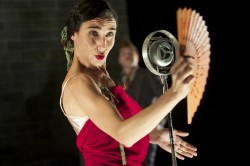 GALA was founded in 1976, the year democracy came to Spain, which makes it very appropriate for us to open our 36th season with this show. Today we are still plagued by ongoing wars in Afghanistan, throughout the Middle East, and elsewhere. This play is not only about memory, but also a shout for freedom and a testimony to the inhumanity of war anywhere and at any time. Many of our artists and audience members have lived through the horrors of the war in El Salvador, the dirty little war in Argentina, and the long Chilean dictatorship, so this play speaks to them personally.

You have directed over 100 plays and produced many others, including children’s theater. How does the theme of ¡Ay, Carmela! reflect your growth as GALA’s Producing Artistic Director?

The fact that I chose this challenging play, and decided to do it as a co-production with our artistic partners in Spain, reflects a more mature approach to taking risks and to working with artists outside of my comfort zone. I believe that I have learned a lot and grown a lot in terms of being able to successfully produce collaborative work and to open my mind to the different approaches of guest directors.

In selecting Jose Luis Arellano as the Director of ¡Ay, Carmela!, what common elements do you think he will bring to the table that will help US audiences understand the complexities of the play?

Although Jose Luis is from a younger generation than mine, and doesn’t have a direct experience as I had with fascist or repressive regimes, he brings a deep knowledge of Spanish culture and history, having been born and lived in Spain all his life. He is a very respected and up and coming director in Spain, who has been assistant director at the National Theater in Madrid, as well as working with youth theater in Parla. As a young director, he has a burning interest in restoring and preserving memory, which is what the underlying theme of this play is.

Do you ever worry that US audiences see issues affecting the Hispanic community through stereotypical lenses?

Of course. One of the principal mission’s of GALA is to break those stereotypes and to challenge U.S. audiences to see us differently. Our task is one of continually educating the public, and after thirty-five years and despite the enormous Latino community in this area, we STILL have to work hard to provide audiences with the historical, social, and cultural context and background of the work we produce, because of their lack of knowledge or their preconceived ideas about Hispanics.

Theatre is pretty much your life. What do you do to recharge your inner inspiration? Who is your muse?

I am constantly recharged by the different artists I work with, by the new challenges we face, and by listening to my inner voice. My trip to the ocean every year gives me great peace, and now that I am a grandfather for the first time, I am thrilled and inspired every day that I see my granddaughter because I have great hope for the future generation. 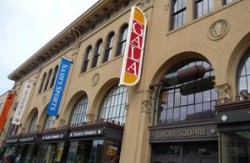 GALA’s new season includes modern classics like ¡Ay, Carmela! and Nilo Cruz’s Pulitzer-prize winning play, Ana en el tropico, as well as a new play in English by a Hispanic-American, I put the fear of mexico in ‘em about borders and stereotypes.

I think we offer something for all ages and all backgrounds. I am directing a new adaptation of Don Quixote for children, as well as an satirical Puerto Rican musical from the 1970s, Puerto Rico Fuá. And of course we have our annual Flamenco Festival, featuring new fusion flamenco, as well as a standup comedian from Colombia, Saulo Garcia, who’s biting show La vida en los esclavos unidos talks about the immigrant experience in the U.S.

Thank you, Hugo. All the best to you at GALA this season!