The glamour of 1940’s theatre may be faded but Rep Stage’s production of Barrymore glimmers and glows with life. Directed by Steven Carpenter, this mostly one-man show, save for a few poignant and well-placed lines delivered from the prompter (D. Grant Cloyd), shows the struggling end of John Barrymore’s (Nigel Reed) life and career. Taking place in the spring of 1942, well past the actor’s prime, the show opens in an empty theatre set so that Barrymore can rehearse his lines for Richard III. As the show unfolds you learn of his inability to remember his lines, creating the need for the prompter, and many of the details throughout his life that have created the man that stands before you. 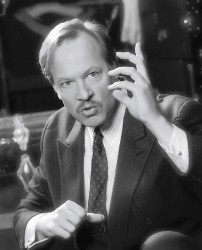 While Rep Stage may not be able to physically transport the audience to 1942, they certainly bring the era forth to the audience. They start with music of the period being piped through the house before the curtain, giving the audience a chance to really feel the mood. And a lavish yet simplistic set, designed by Terry Cobb, creates the perfect balance for Barrymore’s imbalanced character. The simple props and furniture – a costume trunk, a barrel filled with swords and other elongated show props, a roll-on rack of costumes; evokes an atmosphere rich in antiquity while still having the sprightly feel of the theatre’s backstage area. At the beginning of the show the stage is lit by a single dim orange bulb on a stand, glowing shadows across the stage which presents an ambience of ‘ready for rehearsal.’

And right from the moment when you first meet John Barrymore (Nigel Reed), his late arrival to the set, you are captivated by his presence. Simply arriving in a suit with a hat, taking steps from one side of the stage to the other, Reed carries the character in a larger than life style letting us know that this man is in fact very important and perhaps very full of himself. His gruff voice projects clearly to the back of the house and belays the character’s age. But his jovial singing and dancing as he plays around cleverly conceals his downtrodden inner monologue as he reflects on his failing career. Reed maintains the upright posture of a spry young man eager to step into the theatre as an actor preparing for his finest role.

As a storytelling character Reed finds the proper balance between moments of fond reminiscence and active engagement with the audience. He stares off idly, recalling moments of pleasure and pain, but in the very next moment he’s refocused his energy and is bustling about the stage, crossing it with purpose in his attempts to continue rehearsal. Reed transitions smoothly from one moment to the next, sliding with ease from the anger and frustration of failing to remember his lines into the upbeat retelling of a pleasant memory. He makes good use of the props on stage, leaning on an upturned costume trunk as he lapses into a lazy tale about one of his marriages, or when he draws a sword from the barrel and retells the tale of his brother setting up duels in the barn at age six. But when he does meet his moments of forgetfulness, always in his rehearsed lines for the role of King Richard, his expressions do not disappoint. Reed’s befuddled emotions are painted clearly in the squinting of his eyes and the clenching of his fists as he tries so desperately to find the lines in his memory, long pickled by alcohol.

Perhaps the most impressive thing about Reed’s performance as Barrymore is his ability to create so many other vibrant characters throughout the show. While Barrymore is the only man present on the stage (prompter aside) he tells wild tales involving ex-wives, friends, and various other colorful people from his past. And as Reed encounters each character he adapts a new voice and physicality. When discussing Ned, a friend who helped launch Barrymore’s career, Reed slips into a whiny falsetto and hunches forward slightly. When he not-so-fondly recalls the German man running the asylum, Reed bolts upright as if he’s rammed a rod up his spine and speaks English in a broken German growl. Never once do these characters mingle or muddle with Barrymore himself, and through the myriad of an easy dozen no two are remotely close in sound or physicality.

You never see Nigel Reed on stage, so committed is he to the role that you actually believe you are witnessing John Barrymore’s decline as he loses his grip toward the end of the show. A harrowing moment nearly stops the show as Reed collapses back into a haunting monologue from Hamlet. The stage has fallen dark and Reed looks almost maniacal as he paces about, reciting the lines, gazing off with a lost expression haunting his face. He switches from this intense moment into a burst of anger, when regarding George Bernard Shaw’s commentary of that performance, shouting to the rafters and physically shaking his whole body as he does. But in the very next moment he’s cracking jokes about an ex-wife. His progressive deterioration as the character rips apart at the seams is phenomenal. Watching Reed delve into tragic desperation as Barrymore begs and pleads for the prompter not to leave him is truly stunning. The range of this talented actor is astonishing and you get to see it all throughout the production.

It’s an astonishing production that will keep you at the edge of your seat – as you laugh along with John Barrymore and then experience the anguish and the woe of a once great man – reduced to little more than an actor grasping at straws.