Watch out Washington! The fireworks aren’t in the sky but on the stage at the Prince George’s Little Theatre’s production of Born Yesterday written by Garson Kanin. A charismatic politically charged dramadey directed by Norma Ozur – the cast of Born Yesterdayreally drives their act home as they explode their politics and emotions all over the stage. 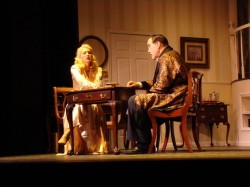 Set in 1946, where gas is cheap and politicians are honest, (mostly) the play revolves around junkyard millionaire Harry Brock and his ‘dumb road’ girlfriend, Billie Dawn. They settle down into a Washington hotel so that Brock can purchase a Senator – but with someone like Billie on his arm – he’s a little nervous. So he hires a reporter to educate her, only Brock ends up with way more than he bargained for in an educated Billie.A pinch of political corruption, a dash of comedy, mix it all together with fantastic leading actors and stunning set and you’ve got a winner. The comedy is highbrow and there are definitely references suited to the politically and historically-like minded.

he set, amazingly designed by Dan Lavanga, gives everything the actors could want and more. You know from the minute you walk in that you are in a decadent Washington D.C. hotel room; you can see the Capitol Dome right through the window. It’s a split level set with four different doors and never once are you left wondering which room is what. It’s heavily furnished but not a single piece of furniture is simply for decorative ambience, because it all gets used by the actors as if the set itself is acting to complete the play. A brilliant design that allows for the audience to enjoy the simplistic things; like the way the lights actually go on and off when the actors flip the switches on the walls. It’s simply marvelous to gaze upon and really enhances the experience.

But the main drive of course comes from the brilliant performances of the two main actors. Harry Brock (played by Sandy Irving) and Billie Dawn (Mary Koster) storm the stage with emotion and excitement unmatched by anyone else in the cast. They barb and bite at one another as only a dirty business man and his dumb broad girlfriend can. The most stunning moment in the first half comes during a silent scene between the couple; as they are seated at a table in the suite playing gin rummy. There is nothing but silence for a solid three minutes but their actions say it all. The dramatic rolling of the eyes; the slamming of the cards against the table, the way her face contorts as she looks at her hand; the way his eyes bug out of his head when she finally calls gin. It’s a priceless moment that speaks volumes about their relationship without doing any actual speaking. 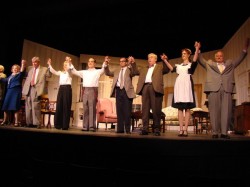 Cast of "Born Yesterday" in a final bow. Photo by Bud Johnson.

Irving delivers a stunning performance as an angry, power-driven money-hungry bastard extraordinaire as he shouts, threatens and blows-up on everyone. His outbursts, though only ever at one level, are always at the top! His thinly veiled anger, even when speaking calmly, is clearly expressed through his fierce scowls and tightly clenched fists. He moves with a purpose and is out for blood, even when it comes to making sure he has his rye and ginger ale. Irving masters the accent of the upstate Jersey kid with the rough past who overcomes it all; never missing a bit, responding and reacting to everything thrown at him. He truly makes the show worth seeing.

But hang onto your hats because the dumb broad isn’t just a dumb broad. Billie (Koster) is exactly what you’d expect from an ex-chorus girl picked up out of the slums by someone like Harry. Koster is really into her role as she flounces through the suite chattering idly away about her two minks and how she had five whole lines when she was last on stage in a musical. She embodies ignorance with an expressive face and over-the-top gestures as she moans and groans being stuck in Washington.

But the most amazing thing about her performance is the transformation we see in the actress as she steps into Act II. Two months has passed and now she’s educated or at least slightly more informed and somewhat more sophisticated. But it isn’t the instant snap cliché of change, she’s progressive. Koster casually drops her newly learned habits into her character, making a point to correct herself when she makes a grammatical mistake, while still wearing the confused stupid look of the ‘uneducated broad.’ She is an incredibly spirited actress with just the right level of exasperating over-the-topness that makes you laugh out loud when she scoots across the suite in her high-heels to look up words like ‘constituents’ and ‘manifesto’ in the dictionary. As the character grows, she grows, so intensely that you don’t want to take your eyes off of her, even when she’s sitting idly listening to the men quarrel. A true show stopper and scene stealer.

So if you’re tired of what’s happening in actual Washington politics, the politics, emotions and relationships that unfurl in this intricate story is the show to see. It’s like watching fireworks over the White House on the  4th of July with Koster and Irving as the big finale bangs.