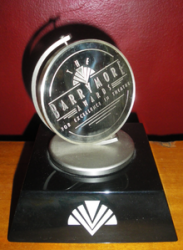 I made my annual trip to Philadelphia to attend their annual  theatre awards called The Barrymore Awards. It’s always a very fun evening where the local theatre community comes together to cheer each other on and to celebrate the very friendly and close Philly theatre community. It’s so nice to hear everyone applauding and whooping it up when a fellow actor/director/designer’s name is announced as the winner. The Barrymores are so unique in that it’s a fun party from the awards ceremony to the after-party at The William Penn Hotel. And to bump into DC favorites Aaron Posner and Kate Eastwood, who were nominees this year, is always a pleasure.

There were lots of surprises at this year’s 17th Barrymore Awards, this past Monday night at Walnut Theatre. Presented by the Theatre Alliance of Greater Philadelphia, the ceremony was directed by Jay Wahl and hosted by 6ABC’s Rick Williams, 27 awards were handed out. 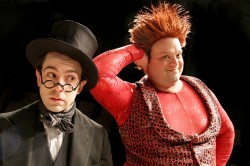 Rob McClure (The Professor) and Scott Greer (The Flea) in Arden Children Theatre's 'The Flea and the Professor'. Photo by Mark Garvin.

Six students from South Philadelphia High School and five professional actors opened the ceremony with an excerpt from We Write South Philly, a play that was the product of three semester-long residencies in which more than 50 students studied acting and playwriting while examining the various layers of identity that make up the high school’s past and present. Following the performance, the first award of the evening, the Excellence in Theatre Education and Community Service Award, went to South Philadelphia High School Principal Otis D. Hackney, III. Hackney was honored for his collaboration with teaching artists from The Wilma Theater, 1812 Productions and Philadelphia Young Playwrights to create, produce and perform this original piece of theater.

The 2011 Lifetime Achievement Award which was given to Harry Dietzler, Founder and Executive Director of Upper Darby Summer Stage; and Terrence McNally received the Distinguished Artist Award, a new honor recognizing theatre artists of national and international renown who choose to bring their talents to Philadelphia. James Ijames was awarded the coveted F. Otto Haas Award for an Emerging Philadelphia Theatre Artist, which comes with a $10,000 cash prize. Love and Communication earned Passage Theatre a $25,000 cash prize with the Brown Martin Philadelphia Award. 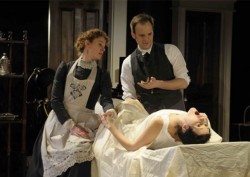 Dan Hodge’s performance in Around the World in 80 Days (Directed by Helen Hayes Award winner Aaron Posner) earned him the Outstanding Leading Actor in a Play award for Delaware Theatre Company; Anna Deavere Smith won the Charlotte Cushman Award for Outstanding Leading Actress in a Play for her performance in the Philadelphia Theatre Company’s Let Me Down Easy (which played at Arena Stage earlier this year); and Waldo Warshaw and Aaron Cromie received the Outstanding Choreography/Movement award for Theatre Exile’s The Lieutenant of Inishmore.

The Barrymore Awards celebrate the work of local theatre artists and companies as they continue the legacy of the Barrymore family. The program is produced by the Theatre Alliance of Greater Philadelphia and is the only comprehensive awards program in the region, recognizing artistic excellence in theatre.  Each year, over 100 productions, produced by local professional theatres, are reviewed by the Barrymore voting committee. Since 1995, the Barrymore Awards have recognized 64 organizations, 599 productions, and 835 artists for the excellence they have brought to the theatre of Greater Philadelphia.

The Theatre Alliance of Greater Philadelphia strengthens and leads the region’s richly diverse theatre community by engaging new audiences for the theatre and strengthening the capacity of its members to serve those audiences. The Greater Philadelphia region spans three states and several counties, and supports over 150 theatre companies – from the oldest continuously operated theatre in the nation, to the small emerging and community theatres. The Theatre Alliance also provides resources to the individual local theatre artists and over one million theatregoers in the region. The Theatre Alliance is guided by a philosophy of collaboration – within the theatre community, the larger arts and cultural community, and the public community at large – toward the goal of increasing the impact of theatre on the Greater Philadelphia region, and seeing Philadelphia emerge as a World Class Theatre City.  For more information, click here.

Watch a video preview of The Flea and the Professor.