In 2007, I took my social group The Ushers to see Dreamgirls at Toby’s Baltimore and an announcement was made before the production began: “Playing Effie today is Crystal Freeman.” I had never heard of Crystal and never saw her perform before – but after she started singing – my jaw dropped and my friends and I looked at each other and all we could say was, “WOW!”

And here she is 4 years later wowing audiences again with her powerful performance of Effie White in the a new production at Toby’s Dinner Theatre in Baltimore.  I asked Crystal to talk about her performance and how it’s different than the last performance.

Who is Effie and how do you relate to her?

I can relate to her because I can be just as driven and I also sometimes fail to see that having ‘atitude’ can get me into trouble. Many times people say that I can be slightly intimidating, but it is really just me focusing on developing Effie more as an actor than a singer.

How much of Crystal is in the way you play her?

There are a lot of similarities between myself and Effie. I can be loud and obnoxious and very pig-headed at times. The biggest difference is that I love singing in the background just as much as I love singing lead.

Why do audiences root for Effie?

Everyone can relate to the average person being essentially pushed to the side for what is perceived to be a more beautiful person. We are such an image-conscious society that at times the arts suffer because it is more important to fit a look – than the artist’s actual talent.

What personal experiences did you bring to your performance as Effie?

Without going into too much detail, I can say that I brought the personal experiences of heartbreak, working so hard to achieve a goal and it being just out of your reach, and losing friends over simple things that don’t matter in the larger scheme of things.

Is your performance based on a relative, or friend, or someone else?

I don’t feel that my performance is based on any one person. It’s a mixture of my life experiences. I look at life as one big classroom. I learn from every situation – good or bad – and take those tidbits of knowledge and apply them to my everyday life.

This is the second production at Toby’s where you have played Effie. What’s different and similar about this production compared to the first one?

This production is a completely different show than the last one. There are only five returning cast members. The only thing that is the same is that the same are myself, David Gregory, Ray Hatch, Ashley Johnson, Dayna Quincey and Bryan Daniels have returned for this production.

How has your performance as Effie changed?

I’m a much better actor than the previous production. There, I was a singer first and definitely and actor last. With this production, I want to make sure that the first thing you notice about Effie is that she is well-acted. Previously, I’ve played her as just being angry and stubborn. I realized that there are so many levels to Effie that I hadn’t known until now. It’s not just a one-dimensional performance where it is all about singing.

What advice did David give you about playing her?

He kept and still keeps repeating, “Bring Crystal to Effie. You two are so much alike.” He is never satisfied. He will give me a compliment and then say, “That’s good. But now I want you to add another layer to that.” It has definitely been a great learning experience.

How are your renditions “And I’m Telling You…” and ‘I am Changing different than Jennifer Holiday and Jennifer Hudson? How do you make them your own? 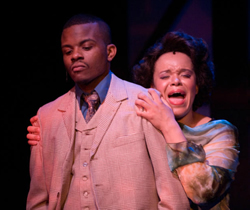 I had to learn to sing my own voice. Cedric charged me with the task of going back and learning what is actually on the page. I also trusted myself to rely on my emotions more with each of these songs. “I Am Changing” is the most difficult song for me. I had to learn to trust my instincts and that is how I’m able to make my interpretations different.

Before you step out on the stage to sing these two powerful and emotionally and heart-wrenching songs, what’s going on in your mind to put you in the right frame of mind to deliver these songs?

I’m telling my story and the stories of millions of other people that are misunderstood and going through tough times. At this point in time I’m completely wrapped up in being Effie. She grows throughout the first act from this young impressionable girl to this woman who has just had her life flipped upside down. In the second act she is struggling to find herself. She realizes that she needs to change – but she can’t do it alone. She needs help. When you just simply read the lyrics it gives you all the tools you need to be in the right frame of mind

How do you prepare yourself mentally and vocally for this role?

To mentally prepare for the role I just sit quietly and go through the entire show in my mind. I definitely have to vocally warm up before each rehearsal and show.

Introduce us to your fellow Dreams.

What do you like best about working with them?

We have a great off-stage chemistry and we all have a common goal of making this the best production possible.

How would you describe them vocally?

They are both amazing vocalists! I’m definitely a fan. They each bring something different vocally to the stage. Ashley’s voice is so high and mesmerizing while Shayla’s voice is so sultry. I enjoy singing with them very much.

Have you worked with them before?

I worked with Ashley on the first production of Dreamgirls. This is actually my fourth production with Shayla.

How would you describe your voice?

I would say that my voice is versatile. I’m fortunate to be able to sing many genres of music. I love singing a Puccini Aria just as much as I love singing “And I’m Telling You.” I understand that my gift is a very unique one, and I’m eternally thankful to God for this ability.

Where did you get your vocal training?

I hold a Bachelors Degree in music from Morgan State University.

Which scene and song that you are not singing in the show do you wish you were singing?

I wish that I could sing all of the parts of the “Quintet.” I think that it is so beautiful. I actually asked David if I could just sing it offstage last week.

What advice would you give young actresses who are about to step on the stage to perform the role of Effie?

I would advise anyone to learn the music as written first and then make it your own. You will be able to touch people’s hearts more because you are coming from your own true emotions. Your singing will be motivated by how you feel – and not just by singing what everyone is used to.

Why is Dreamgirls so popular 29 years after it opened on Broadway?

The music is fantastic!!! My four year old daughter was singing “That man will break your heart” in the mall on Saturday. I kept saying, Oh, she’s just been to rehearsals with me.” It appeals to everyone.

What do you want audiences to take with them after seeing you perform the role of Effie?

Hopefully, people will leave the show thinking that it was sung beautifully, and the acting was just as good – if not better.