Set in a theatre affectionately referred to as ‘The Black Box’ the empty stage of American University’s The Katzen Art Center’s Studio Theatre still gives off an ominous quality. The audience is seated on two sides on risers, facing the performance area at an angle, two projection screens hang on the black walls, and blue light hits the otherwise empty floor in stripes, looking like it’s shining metal bars. Even in the otherwise happy buzz of a full house, the stage doesn’t seem to be a place anyone would want to be – quite suitable for a play like Dead Man Walking. 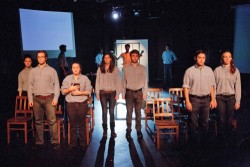 Set primarily in the Louisiana State Penitentiary in the early 1980s Dead Man Walking is the story of a young nun, Sister Helen Prejean (Sarah King), who is asked as part of her work with the poor to write to a prison inmate on death row, Matt Poncelet (Sam Edgerly). Poncelet has been on death row six years at the start of the play, one of two men convicted for the rape and murder of a teenage couple. Whether for having a worse attorney, or the state having more evidence against him, Poncelet has been “given death, while the other life [in prison].” Too poor for an attorney to file an appeal, Poncelet begs Prejean to get someone who can file motions with the pardoning board, governor, and federal courts to save him from execution. Acting as his confidant and spiritual advisor, Prejean finds herself tangled up in a situation she never meant to be in – caring for a man afraid to die and decried for trying to help a monster by the families affected by the rape and murder.

Even though King and Edgerly may have had the main rolls in the play, it would be difficult to point to one actor who stole the performance. As Prejean, King manages to embody both the sweetness and strength of the character, embodying a woman that is both caught in a situation she didn’t know she was getting herself into and someone fiercely determined to do all she can to help someone in need. At the same time, David Landstrom, double cast as both Poncelet’s lawyer, Hilton Barber, and younger brother, Troy, switches between the two parts seamlessly, presenting a knowledgeable, assured lawyer for the majority of the show before switching to a shy little boy–seeming just as convincing and comfortable in each of the parts. And, as the actual dead man walking, Edgerly shines in his part as Poncelet, managing to take a what otherwise might be abhorrent character – a convicted murderer, rapist, a white supremacist – and bringing humanity to the part, playing Poncelet’s duality in a way that created enough of an emotional connection to the audience that he moved some to tears.

On top of the brilliant acting, the Lighting Designer for the production, Joey R. Walls, must be given special mention. Set in a room that is, quite literally, a black box, with nothing on stage for the majority of the performance but chairs, the acting could have easily been made to carry the performance – making the characters not only tell the story but also set the scene. Walls manages to take that responsibility off the actors, using a mixture of back lighting, traditional stage lights, colored gels, and even fluorescent bulbs to form bars, switch in the memory sequences, and give an uncomfortable, sickly glow while inside the ‘prison’ that is as effective as the acting in presenting something that is both off-putting and captivating at the same time.

If there is any critique to be made of the performance, it is perhaps the added political message the production chose to add over the already inherently anti-death penalty play. Using both recordings of recently, and controversially, executed Troy Davis and death penalty statistics in the background of the performance at times, it seems at best unnecessary–as the play overall gives the same message of being uncomfortable with the death penalty inherently – and at worst preachy. With such powerful acting and great scene setting, it perhaps would have been best to rely on the play itself to connect to the modern day than to force it there with added bits of media.

In all, it is easy to see why American University’s Dead Man Walking has been as popular as it has been so far in its short run – Friday night’s show demanding a waiting list for tickets. It is a captivating play, both in terms of acting and production.

Running time: One hour and 45 minutes with no intermission.

Dead Man Walking concludes its run today October 1, 2011, with two more performances at 2 PM and 8 PM. Tickets are available by calling 202 885-ARTS, purchasing tickets online or at the box office in The Katzen Art Center on American University’s campus  – though calling ahead is advised due to popularity and limited seating.