No description can do justice to Steven Berkoff’s Greek, at Scena Theatre. The play is an updating of the Oedipus Rex story, set in London of the 1980s. But that doesn’t get at the play’s off-kilter splendor. It’s a tragedy that is riotously funny. It pokes fun at high art while approaching high art itself. It is a scathing social critique ensconced in comedy, bundled in tragedy. It must be experienced. 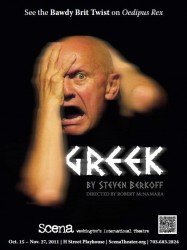 The language alone sets Greek apart from the usual offerings on Washington stages. Unprintable four-letter words, delivered with a Cockney accent, are mixed with thou and dost, in iambic pentameter. The effect is exhilarating. The play is an updating not just of Oedipus Rex, but of Shakespeare. At times, the language is truly beautiful, a kind of poetry. Referring to the cloudy weather in his rundown North London neighborhood, Eddie (yes, Oedipus) says, “The sun sees what it has to shine on and says, ‘f*** it, is it worth it?’ and beats a hasty retreat.” The play moves in and out of those moments of lyricism, alternating them with moments of riotous absurdity. Referring to a part of the female anatomy, Eddie says he would like to put a particular something “up her sweet and wondrous letterbox.” He describes his neighborhood’s “emerald lawns close cut like the shaven heads of astronauts.” Profanity abounds, but no word seems out of place; the relationship between profanity and beauty is one of the questions the play explores. Where are the boundaries? 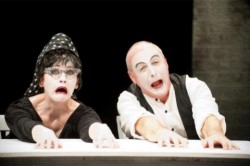 Critiques of British society in the Thatcher years undergird the drama. Eddie sets out “to amend the woes of [his] own state,” which is suffering from a plague. Over an argument at a café involving a cheesecake and a second cup of coffee he kills his father. A critique of English cuisine finds its way into the play, in iambic pentameter, of course (“foul and bestial things poured out of packets”). The waitress, Eddie’s mother, takes her husband in her arms as he dies, and asks, in effect, who will give me a friendly punch in the mouth now, after work?  Whose head will I hold as he vomits on a Friday night? Eddie volunteers. He takes over the café, does well, and moves to an area where the wealthy are “nicely tired from their days of graft and thieving in the city.” When Eddie finds that he himself is the plague, the question is whether tragic heroism and purgation in this context are even possible.

Greek is challenging play to produce. The set has no complicated requirements – a table and four chairs serve well throughout – but the play’s shifts between beauty and absurdity, comedy and high sentence require sensitive direction and versatile, expressive acting. Director Robert McNamara ensures that the play has its full life.   He has cast phenomenal actors, and their timing is perfect. Eddie (Eric Lucas) carries the heaviest burden, delivering long and sometimes tongue-twisting monologues. But he is compelling. While he intones, in his Cockney accent, the three other characters illustrate his points with comic pantomime.

All the actors are in white face, a decision usually made in productions of Greek, and the effect is to keep the audience focused on the mechanics of the play, instead of investing in the individual characters. Danielle Davy is excellent as Eddie’s mother and especially as the Sphinx. Kneeling upon the table, her eyes lit to a pale glassiness, she is ominous, profound and hilarious as she sets Eddie straight on some basic points (“You are from my rib, Mister!”) Nanna Invargsson, as Eddie’s wife, is spectacular, riveting and charismatic. To see such quality acting is a treat. David Bryan Jackson, as Eddie’s dad, is wonderfully expressive, and his comic timing is perfect. The only disagreeable aspect of the production is the tedious, nerve-jangling electronica music the audience is subject to before the lights come up, but that is a small price to pay, and one easily escaped by lingering in the Guinness and Newcastle-stocked lobby.

Because of the freshness of what Berkoff is doing and because Scena is so well equipped to do this play justice – and also because you will laugh hard and long – Greek is a must-see.

Running time is two hours, with a ten-minute intermission.