Compass Rose Studio Theater is a Not-For-Profit teaching theater company located in Annapolis, Maryland. Lucinda Merry-Browne, theater director and educator and member of Actors’ Equity, founded the theater with a mission rooted in education for all ages. Located in the Eastport Shopping Center in the city of Annapolis, the intimate 50-seat theater offers full theatrical productions as well as classes and workshops. 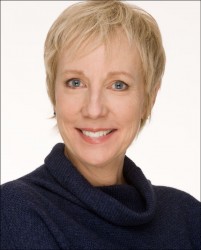 The mission of the theater is to bring career actors and other theater artists together with theater students in productions. The presence of student actors changes the dynamics of how the play is created. Professionals mentor the younger actors, and the students infuse the process  with an energy and dedication which come only with discovery of the magic of theater.

The studio is growing rapidly, reaching into the community to offer professional theater instruction. Classes are offered both on and off-site, including the arts magnet programs at Bates and Brooklyn Park Middle Schools, Maryland Hall, Chesapeake Arts Center, The Key School, Enrich Annapolis at St. Anne’s Day School, St. Martins in-the-Field in Severna Park, Davidsonville Elementary School, and Anne Arundel Community College at Heritage Harbor. A community outreach program offers scholarship opportunities for disadvantaged students who would not otherwise be able to learn about and experience live theater. All of the Compass Rose Studio Theater faculty are career teaching artists with a minimum of a Bachelor’s Degree in theater, and are working professionals in their field. 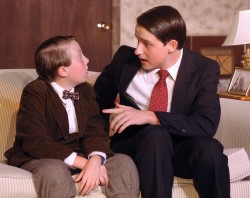 Will Fritz as Arty and Eli Pendry as Jake in ‘Lost in Yonkers.’ Photo by Stan Barouh.

This season, 2011-2012, the company will mount three shows. Currently, Lost in Yonkers, by Neil Simon, is running Thursdays through Sundays until November 20, 2011. The Miracle Worker, the true story of Helen Keller’s discovery of language, opens February 10- March 11, 2012, and the musical, Oliver!, opens April 27, 2012 and runs through May 27, 2012.  All three plays pair students with seasoned actors, a cornerstone of Compass Rose Studio Theater’s mission. 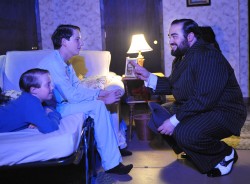 Compass Rose Studio Theater’s inaugural production, Lost in Yonkers by Neil Simon, is directed by Brandon McCoy, the theater’s resident teaching artist. The play is a story of two boys in the 1940s left with their Grandma in Yonkers while their father is away working. Grandma Kurnitz is a fierce, strict and distant woman, who has raised six children and wants no more. Addled Aunt Bella, who lives at home and Uncle Louie, the shady “business man”, and Aunt Gert, gather round to love and help the boys as they come to realize the hard realities of life in Yonkers, and the joy of surviving hard times together.